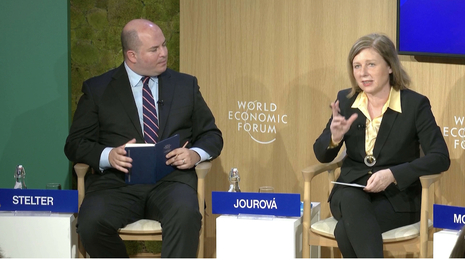 The World Economic Forum (WEF) hosted a panel as part of its ongoing Davos 2023 conference titled, “The Clear and Present Danger of Disinformation.” Ironically, the panel moderator was Brian Stelter, a former anchor for CNN, a network renowned for its constant lies and partisan half-truths.

Aside from the panelists’ hypocrisy and hatred of Donald Trump and Rep. George Santos (R-NY), two key points emerged. The panelists claimed that people need to start trusting “established” information sources instead of online “disinformation” spreaders. The proposed solution was to amplify those “trustworthy sources” while “pre-bunking” (i.e. censoring) content deemed “disinformation.”

Jourová made fun of Americans’ legitmate free speech concerns and questions like “‘Will you order removals—removing of content online’? It’s so simplified,” she complained.

Jourová went on to mask her censorship recommendations as safety measures, touting the European Union’s Digital Services Act, which aims to censor “illegal” content. That includes so-called “extremist” content and “hate speech,” the latter of which Jourová mentioned and predicted it would soon be illegal in the U.S. too.

Unfortunately, “hate speech” and “extremism” have often been leftist excuses to censor content that doesn’t fit establishment narratives. When anything can be defined as “extremist,” removing “illegal content” simply becomes partisan censorship, as the Twitter Files show.

The European Commission ensures that “disinformers do not find their feeding ground,” so that people online and offline are not “brainwashed,” Jourová continued. She suggested education, partly “through the work of professional media” like New York Times, and urged that politicians “should be more intensive in delivering trustworthy facts.”

She also recommended “pre-bunking,” a form of censorship that prevents non-approved content from ever being able to garner widespread engagement or viewership.

Bourgault alleged that “gendered disinformation,” or disinformation targeted at women, is “one of the most terrifying” types of “misinformation” online. “Platforms, when it comes to content moderation, do have a responsibility for trying to keep people safer,” she said, and called on advertisers to force suppression of speech to “help democracy.” Content moderation is often how leftists refer to censorship.

The New York Times’s Sulzberger agreed with other panelists on the importance of teaching children to identify “trustworthy” sources and to ignore “disinformation.” He offered his biased publication, scientists, and “academia,” as examples of supposedly “trustworthy” sources, but he also had a more censorship-focused solution.

Sulzberger then stammered, “[A]t some point, given the central role of the platforms in disseminating bad information, I think they’re going to have to do an unpopular and brave thing … to differentiate and elevate trustworthy sources of information consistently.” Sulzberger calmly admitted this “may suppress engagement.”

Moulton meanwhile whined that he had to become accustomed to “mean” messages on social media and claimed that disinformation, both online and offline, have gotten a “lot worse” since “Donald Trump came to power, and proved that lying works.” He defended Democrat pressure on platforms to censor as necessary “to achieve … some measure of public safety.”

Conservatives are under attack. Contact your representatives and demand that Big Tech be held to account. If you have been censored, contact us at the Media Research Center contact form, and help us hold Big Tech accountable.