The latest release of Twitter Files reveals how the platform banned then-President Donald Trump in January 2021, as employees compared him to Hitler, despite internal assessments that Trump had not violated the platform’s rules. 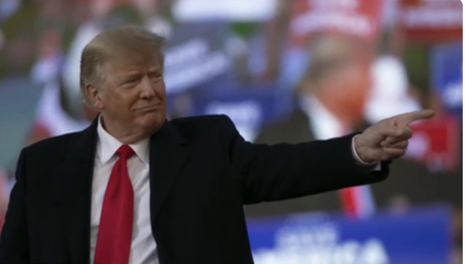 The Free Press founder Bari Weiss tweeted part five of the “Twitter Files” on Monday, revealing more details of how the platform justified its ban of Trump, whose account was recently restored by new Twitter owner Elon Musk. Weiss cited two Jan. 8, 2021, tweets from Trump that Twitter employees used to justify his ban, despite internal Twitter communications saying the tweets didn’t violate any rules. Musk emphasized Twitter’s censorship of a sitting president without grounds when he quote-tweeted Weiss’s thread, saying, “Under pressure from hundreds of activist employees, Twitter deplatforms Trump, a sitting US President, even though they themselves acknowledge that he didn’t violate the rules.”

At 6:46 a.m., Trump tweeted, “The 75,000,000 great American Patriots who voted for me, AMERICA FIRST, and MAKE AMERICA GREAT AGAIN, will have a GIANT VOICE long into the future. They will not be disrespected or treated unfairly in any way, shape or form!!!” Trump added at 7:44 a.m., “To all of those who have asked, I will not be going to the [Biden] Inauguration on January 20th.”

Dissenters inside Twitter, including a Chinese employee, argued against banning Trump, but they were a “distinct minority” after Jan. 6, 2021, when Twitter employees organized and demanded the ban. Weiss included screenshots of internal messages and cited a letter insisting on the ban that was signed by 300 Twitter employees to former CEO Jack Dorsey, and published by The Washington Post.

Weiss did not mention Trump’s Jan. 6 tweet specifically calling for peace at the Capitol. She did note that Twitter staff “assigned to evaluate tweets quickly concluded that Trump had *not* violated Twitter’s policies,” particularly not on grounds of incitement.

Twitter policy official Anika Navaroli told Twitter employees Twitter’s Safety division had confirmed Trump’s tweets were not violative, contrary to her later testimony to the Congressional Jan. 6 Committee that she “had been begging and anticipating and attempting to raise the reality that if nothing—if we made no intervention into what I saw occuring, people were going to die.” The only people who were killed on Jan. 6 were two protesters.

Twitter’s “scaled enforcement team” suggested that Trump’s phrase “American Patriots” could be interpreted as meaning the Jan. 6 protesters specifically. That team ridiculously painted Trump as “the leader of a terrorist group responsible for violence/deaths comparable to Christchurch shooter or Hitler.”

An all-staff meeting two hours later failed to quell employees, and about an hour later Trump was permanently banned for alleged “risk of further incitement of violence.” Many Twitter employees were “ecstatic” and “congratulatory,” Weiss said, and the next day immediately set their sights on increased censorship of “medical misinformation.” The Trump ban concerned other world leaders, but a Twitter employee said “Twitter’s stance … that we aren’t the arbiter of truth” never gave that staffer a “warm fuzzy feeling.”

Weiss explained, “For years, Twitter had resisted calls both internal and external to ban Trump on the grounds that blocking a world leader from the platform or removing their controversial tweets would hide important information that people should be able to see and debate.”

She cited examples, including Iran’s Ayatollah Khamenei, who tweeted, uncensored, in 2018 that, “#Israel is a malignant cancerous tumor in the West Asian region that has to be removed and eradicated: it is possible and it will happen.”