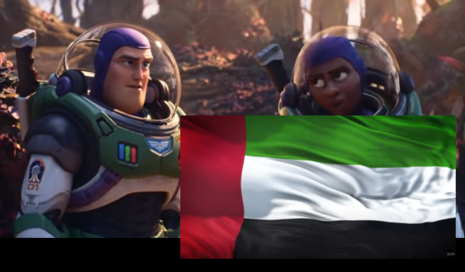 Disney+ is not streaming some Disney movies with LGBTQ+ scenes on its Middle East version of the streaming platform, according to Fox Business.

Islam is the official state religion of UAE. Lightyear and Baymax will not stream on Disney+ Middle East due to scenes with LGBTQ+ content, Fox News reported. Disney-Pixar’s Lightyear featured a same-sex kiss, while the Baymax kids’ series features openly LGBTQ+ characters.

The Hollywood Reporter reported that Disney+ Middle East content will comply with local regulatory requirements, and the platform will also modify its content in accord with “regional cultural sensitivities.”

Fox News reported that Disney+ Middle East does not show “kid-focused content” with LGBTQ+ scenes, but the platform will stream “Doctor Strange and the Multitude of Madness,” which countries including Saudi Arabia and Kuwait banned from theaters. Disney did not release Eternals, Thor: Love and Thunder or West Side Story in theaters in the Gulf area over the past year due to LGBTQ+ scenes, Fox Business wrote.

The Doctor Strange sequel and Eternals did air in UAE theaters but with parts of the movies edited, including “to remove all public displays of affections,” Fox News reported. Lightyear was banned in 14 countries as of June 16 due to the movie’s lesbian kiss, as MRCTV reported.

Disney hypocritically bashed Florida Gov. Ron DeSantis in March when DeSantis supported legislation targeting the radical LGBTQ+ agenda for young children in school. Yet when it comes to the UAE, Disney self-censors to cut out objectionable LGBTQ+ content.

Woke Disney+ has gone out of its way to pander to other totalitarian countries before. The platform also censored part of the Tiananmen Square episode of “The Simpsons” in Hong Kong in December 2021 in an apparent attempt to appease the Chinese Communist Party.

Conservatives are under attack. Contact Disney+ at 888-905-7888 and demand that the company be held to account to mirror the First Amendment and to provide transparency and clarity on hate speech. If you have been censored, contact us using CensorTrack’s contact form, and help us hold Big Tech accountable