Iran’s Ayatollah Khamenei took a brief respite from attempting to incite violence against America and Israel to call for more censorship of alleged “false claims” online. 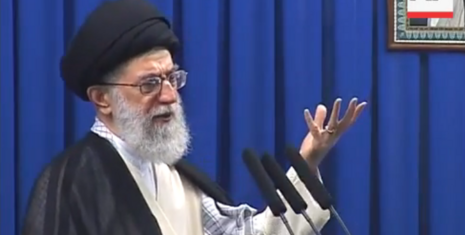 Ayatollah Khamenei, supreme leader of the terrorist-supporting Iranian government, insisted on the necessity of information control in a recent speech, Reclaim The Net reported. He called for more laws targeting “lie[s]” online, as the Iranian government considers legislation to increase online censorship.

Khamenei claimed that “psychological security” is a right for Iranians: “It means that each day rumors, false claims, and frightening statements should not be spread in people’s minds.” He claimed that the internet has made the problem worse.

“Once every few days or every few hours, rumors or false claims by specific or unknown individuals are published on the internet which frightens people and disturbs their minds,” Khamenei asserted. “A lie spread as a rumor.” He said the “judiciary” must address the issue, adding that “existing laws” could also be helpful. “If we don’t have the law we should create new laws quickly,” Khamenei said.

The Internet Protection Bill currently under consideration in Iran could give the government total control of speech online. Officials have dismissed rumors that Iran intends to ban Meta’s platforms from the country, Reclaim The Net reported.

Khamenei appears to have broken Twitter’s rules multiple times over the years, however. He has called for the deaths of American politicians and the destruction of Israel. Twitter’s Glorification of violence policy states, “You may not threaten violence against an individual or a group of people. We also prohibit the glorification of violence.” The U.S. Department of State has classified the Iranian government as a major state sponsor of terrorism for decades, but Facebook and Twitter continue to allow Khamenei to post while also continuing their account bans on former President Donald Trump.

Khamenei’s anti-Semitic online rants are often hyperbolic and based on false claims, meaning he pushes dis- and/or misinformation himself. For instance, a recent video posted to Khamenei’s official website is titled, “Zionism is a plague which must be exposed.” Khamenei also frequently praises the late mass murderer Gen. Qassem Soleimani online.

A January video from his website, which Khamenei shared on Twitter before the platform censored it, is called “Revenge is definite.” It depicts the assassination of Trump and former Secretary of State Mike Pompeo. Many of Khamenei’s violent and threatening tweets remain uncensored on Twitter months or even years after posting, including a 2018 tweet calling Israel a “malignant cancerous tumor” and a January 2022 tweet threatening “retribution in this world” against Trump.