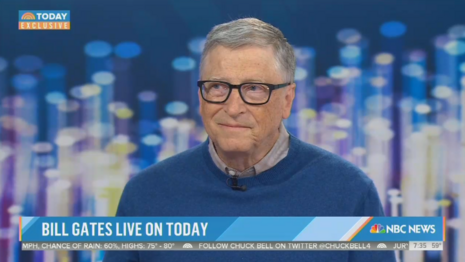 Bill Gates took to Twitter to claim that the reversal of Roe v. Wade would “set us back 50 years.” The tweet came during a huge controversy over a leaked U.S. Supreme Court document revealing that SCOTUS will vote to repeal the decision that legalized abortion.

Microsoft founder and leftist billionaire Gates tweeted his support for the SCOTUS ruling that legalized baby killing. “I was shocked to wake up to the news this morning. A reversal of Roe v. Wade would set us back 50 years and disproportionately impact the most vulnerable women in society,” he tweeted. “I support a woman's right to make their own decisions about their health care.”

Bill Gates has been committed to furthering population control and abortion access for years. His family’s namesake organization, the Bill and Melinda Gates Foundation, contributed $81,009,329 to the abortion mill Planned Parenthood and affiliates from 2009 and before to 2018. The Gates Foundation also donated at least $11,381,171 to the leftist “overpopulation”-focused Population Council, just between 2018 and 2020 alone.

Furthermore, in a 2010 TED Talk about combating so-called “climate change,” Gates explained how to decrease carbon emissions potentially by decreasing the population. “The world today has 6.8 billion people,” Gates said during the talk. “That’s headed up to about 9 billion. Now, if we do a really great job on new vaccines, health care, reproductive health services, we could lower that by perhaps ten or fifteen percent.”

In contrast to leftist hysteria over the leaked SCOTUS document, MRC President Brent Bozell tweeted about the leak and its fallout. “The pending decision to overturn Roe was leaked so the left and the media could do everything possible to sway the court,” he said. “Pray they fail and millions of unborn babies are saved.”