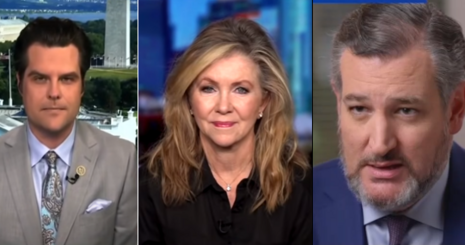 Cruz slammed Twitter’s brazen censorship. “Twitter openly censors speech based on political views and makes a mockery of our Constitutional liberties,” Cruz said in a statement to MRC. “If Elon Musk can turn that around to actually protect free speech and encourage open discourse, we'd all be better off.”

Gaetz jested about Twitter’s censorship practices. “After they kicked Trump, MTG [Rep. Marjorie Taylor Greene (R-GA)], and Babylon Bee off, Elon Musk and I are basically the only interesting accounts left,” Gaetz said. “I’m not in a position to buy Twitter at this time, so I’m glad Elon made a move.”

Musk, who also owns Tesla, offered to buy Twitter's outstanding stock, putting the company under new ownership and taking the public company private. Musk tweeted his U.S. Securities and Exchange Commission filing on April 14, saying, “I made an offer.” The tech billionaire slammed the censorship-heavy platform on its own doorstep March 26, tweeting, “Given that Twitter serves as the de facto public town square, failing to adhere to free speech principles fundamentally undermines democracy. What should be done?”

Media Research Center's CensorTrack database has documented 1,955 cases of censorship from Twitter. On April 13, Twitter suspended the popular account Libs of TikTok, after the account tweeted almost exclusively in recent days about the LGBT community's attitude toward children.

Conservatives are under attack. Contact Twitter at (415) 222-9670 and demand that Big Tech be held to account to mirror the First Amendment and provide an equal footing for conservatives. If you have been censored, contact us at the Media Research Center contact form, and help us hold Big Tech accountable.