The Media Research Center (MRC) is proud to announce the addition of a new partner to the Free Speech Alliance, The Heritage Foundation. “Big Tech is an enemy of the American people,” Heritage President Kevin Roberts said in a press release. 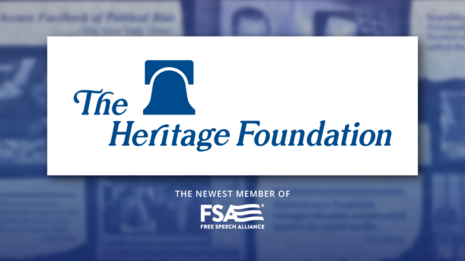 Big Tech is “weaponizing unprecedented power and influence to silence Americans, undermine freedom, and fundamentally reshape our society,” Roberts said. “It’s time for conservatives to unite and push back, and that’s why Heritage is joining the Free Speech Alliance.”

Roberts explained further why Heritage joined the Alliance. “I am so proud to join this effort, led by Brent Bozell and the Media Research Center, who have done so much for the cause of freedom in this country,” Roberts said. “We will only win this fight against Big Tech if we work as one, and make clear the truth of what more and more Americans are learning every day—Big Tech is not a force for good, and that it is time for policymakers at the state and federal levels to implement aggressive reforms that rein in Big Tech’s influence and constrain its ability to unduly impact our republic. I look forward to the victories we will win together.”

Bozell continued: “It is only fitting that, today, Heritage joins us in the fight to hold Big Tech accountable and restore free speech online.  Now, more than ever, it is critical that conservatives band together against the existential threat that censorship poses to the founding principles of American democracy.”

The Free Speech Alliance was founded to confront today’s liberal media bias that is taking over social media and making the internet the new battleground for free speech. The Alliance coordinates responses to and fights against the very real and dangerous problem of online censorship.

Conservatives are under attack. Contact your representatives and demand they hold Big Tech to account to mirror the First Amendment, provide clarity on hate speech and an equal footing for conservatives. If you have been censored, contact us using CensorTrack’s contact form, and help us hold Big Tech accountable.