Someday the metaverse will come … and it may be sooner than later for Disney. The corporation is reportedly exploring the potential of “headsetless augmented reality” through a “virtual-world simulator” in their Disney theme parks. 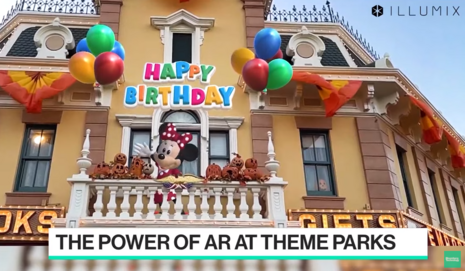 The U.S. government approved a Disney Enterprises patent for a “virtual-world simulator” in the last week of December, according to Insider. Disney’s technology would be able to project virtual effects such as 3D images onto physical spaces, per Insider’s analysis of the U.S. Patent Office filing. Disney CEO Bob Chapek is reportedly seeking storytelling on a “three-dimensional canvas.” The patented metaverse technology also includes a “tracking system to track a moving perspective of … a user in the real-world venue,” according to the patent. This would reportedly allow Disney to tailor each user’s experience, showing, for instance, one Disney parks visitor or group Mickey Mouse and another visitor Snow White. This tech does raise privacy concerns, however.

Several outlets have already highlighted the potentially invasive nature of virtual reality (VR) or augmented reality (AR) involving headsets. This is particularly true when the companies making the tech, such as Meta, have a history both of censorship and biased narrative influencing. It is somewhat unclear exactly how Disney’s “headsetless” AR and virtual technology would work, but its tracking system meant to create a personalized experience could end up collecting a dangerous amount of private data.

Disney reportedly sees the simulator as cheaper and more convenient than a VR/AR headset, as well as requiring less sanitizing in a world of post-COVID-19 procedures. The simulator could have as many drawbacks as benefits, however. Disney has censored the word “God” and anti-communist Chinese content before, and targeted individuals such as actress Gina Carano for conservative comments. How do users know what Disney would do with the data collected for the AR tech? How will Disney be held accountable for use and storage of the data? Even if -- as Insider indicated is possible – Disney does not implement the technology anytime soon, these questions need to be addressed.

Conservatives are under attack. Contact Disney+ at (888) 905-7888 and demand that the company be held to account to provide transparency and clarity on hate speech. If you have been censored, contact us using CensorTrack’s contact form, and help us hold Big Tech accountable.