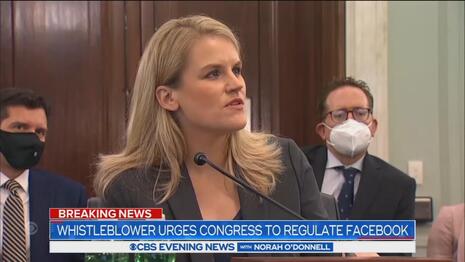 The Wall Street Journal, which originally broke the “Facebook Files” revelations from leftist “whistleblower” Frances Haugen, claimed in a new piece that Facebook had intentionally depicted Haugen as a leftist activist to rouse Republicans.

The Journal also said that Facebook had presented Republicans to Democrats as overly focused on social media restrictions on recently acquitted Kenosha shooter Kyle Rittenhouse. The Journal asserted that Facebook’s goal was to divide lawmakers “along partisan lines” at a time when Republican and Democrat lawmakers alike are looking to take down Big Tech. Facebook seems to think it should not be held accountable for its mistakes.

“Their biggest fear has been conservatives and liberals coming together to break up their so-called family of apps, and it could very well be coming very soon,” added The Journal, quoted ForAmerica President David Bozell. “It’s not every day that [Republican] Mike Lee, [Democrat] Amy Klobuchar and [Republican] Ken Buck get together and break bread on these things—on anything.”

Facebook’s name change, denials, and manipulating were part of a strategy by the tech giant in the wake of the release of Wall Street Journal’s “Facebook Files” series, which revealed a multitude of missteps Facebook made in handling user-posted content in the run-up to the 2020 election.

Facebook has now restricted “internal access settings for research discussions on topics” to those directly involved in the topics, according to The Journal. Former executives have also said that Facebook CEO Mark Zuckerberg instructed his employees not to apologize. Zuckerberg has not recently testified before Congress, sending his subordinates instead.

“When our work is being mischaracterized, we’re not going to apologize,” Facebook spokesman Andy Stone reportedly said. “We’re going to defend our record.” This emphasizes what free speech advocates have said for a long time: Facebook has too much power already, and it is so convinced of its power that it believes it should not be held accountable.

Free speech advocates may be in a tight place, however. On the one hand is Facebook, so full of hubris that it believes it can solve its problems by changing its name and stirring up divisions in Congress.

On the other hand is Congress, where several of the most vocal anti-Big Tech senators now, including Amy Klobuchar (D-MN) and Richard Blumenthal (D-CT), want to “solve” problems by increasing censorship. Free speech supporters can only hope that a better, more objective solution to the threats of Big Tech companies like Meta can be developed in the coming year.

Conservatives are under attack. Contact your senators and demand that any ideas they support protect conservative speech. Tech giants should afford their users nothing less than the free speech embodied in the First Amendment as interpreted by the U.S. Supreme Court. If you have been censored, contact us using CensorTrack’s contact form, and help us hold Big Tech accountable.