A government-controlled news outlet threatens another country with becoming “cannon fodder.” A ruler hurls insults at another nation and demands that allies sever all ties with that nation. A government official accuses another country of bringing “nothing but death, destruction [and] tyranny to the world.” All of these appalling instances have happened recently on Twitter and gone totally uncensored. Yet, former President Donald Trump was permanently banned. 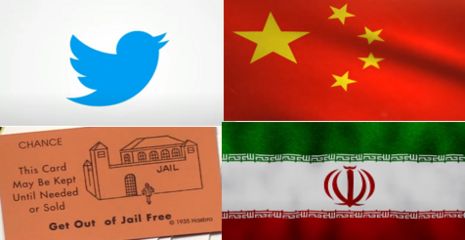 MRC Free Speech America previously reported on a Chinese Communist Party (CCP)-controlled Global Times tweet that said, “#COMMENT Since Taiwan authorities are preparing for war, let's see whether Australia is willing to accompany Taiwan separatist regime to become cannon fodder.” The Oct. 4 tweet still remains uncensored on Twitter as of the publication of this piece.

Twitter’s “Violent organizations policy” also states, “There is no place on Twitter for violent organizations, including terrorist organizations, violent extremist groups, or individuals who affiliate with and promote their illicit activities.” Iranian supreme ruler Ayatollah Khamenei’s account tweeted support in May for “Palestinian fighters,” many of whom are terrorists. Khamenei called Israelis “Zionist criminals” in the tweet. “I thank God for His aid and the honor bestowed on Palestinian fighters. I extend my congratulations for victory over Zionist criminals.”

Twitter’s policies also ban “Hateful conduct” on the basis of “national origin,” which would appear to include extreme accusations against and insults to the U.S. and other countries.

Chinese Foreign Ministry spokesman Zhao Lijian tweeted on Sept. 13, a demand that the U.S. cease diplomatic relations with Taiwan and recognize the separate nation as China’s territory. “The #US should earnestly abide by the one-China principle and the three China-US joint communiques, stop official exchange with #Taiwan in any form and stop elevating relations with it in essence, including not to rename Taipei Economic and Cultural Representative Office.”

China is not the only government to bully other nations or display nationally-based bias on Twitter, however. Ayatollah Khamenei tweeted an open demand for Palestine and other Muslim nations to take action against Israel on Oct. 24: “An indicator of Muslim unity is the issue of Palestine. If Muslim unity is realized, the issue of #Palestine will be solved in the best way. Some Islamic govts committed a grave sin by normalizing relations with the usurping, despotic Zionist regime. They must repent & compensate.”

Iranian government official Javad Zarif (who has a verified Twitter account) tweeted a harsh accusation Sept. 10 against the U.S, “While citizens of several US allies perpetrated 9/11, Iranians in Tehran sympathized with American victims. That global solidarity could've been put to good use. But the US paradigm of coercion & war. . .has brought nothing but death, destruction & misery to the world.” This is ironic considering that Iran is a major state sponsor of terrorism, per the U.S. State Department.

China’s Global Times also slammed the U.S. in a Dec. 2 tweet, “#WeaponizedDemocracy: Exporting wars, launching ‘color revolutions’ and inciting extremist ideologies – in the name of democracy. . .the #US has left endless bloodshed and turmoil around the world.” Evidence shows the Chinese government has genocidal policies against Uyghur Muslims.

Conservatives are under attack. Contact Twitter at (415) 222-9670 and demand that Big Tech be held to account to mirror the First Amendment while providing an equal footing for conservatives. If you have been censored, contact us using CensorTrack’s contact form, and help us hold Big Tech accountable.