Haven’t we been down this road before? Axios has unveiled a project in partnership with Google Trends to analyze “which political issues voters are searching for in each congressional district.”

Psychologist and researcher Dr. Robert Epstein, PhD exclusively explained the worrisome implications of the Axios-Google Trends project to MRC Free Speech America. “The more you know about people, the easier it is to manipulate them,” Dr. Epstein warned. 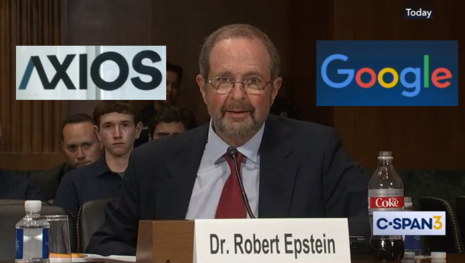 Axios reported on its new election-related data analysis project with Google Trends on Tuesday. The article included maps of the U.S., showing the frequency of keyword searches for certain words/phrases on Nov. 2-4. The article began by citing how the gubernatorial election victory of Virginia Republican Glenn Youngkin spurred many Google searches in the state of Virginia for “critical race theory.”

Axios stated, “In a first-of-its kind project we're unveiling today, one year out from the 2022 midterm elections, Axios and Google Trends will be tracking which political issues voters are searching for in each congressional district over the course of the next year.” The outlet noted that issues like critical race theory “are resonating in vulnerable Democrats' backyards.”

Dr. Epstein had a warning for MRC Free Speech America on the Axios-Google project. “The ‘new’ project is something Google already does in a far more granular fashion than the Axios announcement describes,” Epstein said. “The Axios/Google project focuses by congressional district on issues that people are searching for on Google, but Google knows precisely what issue individuals are searching for - and, through their emails and other documents Google tracks (such as Google Docs) - what issues individuals are concerned about.”

Dr. Epstein explained the implications of Google having this knowledge. “Among other things, this allows Google to keep a close eye on voters who are undecided and whose opinions can still be changed,” he said. “The detailed information they have about each and every one of us allows them to effectively shift opinions with biased search results, search suggestions, answer boxes, answers on personal assistants (Google Home and the Google Assistant on Android phones), YouTube videos, targeted messages, and more.”

Epstein warned, “The more you know about people, the easier it is to manipulate them. And almost all of these manipulations use what Google employees refer to as ‘ephemeral experiences,’ which means they leave no paper trails for authorities to trace.” Dr. Epstein is still engaging in ongoing research on Google.

Dr. Robert Epstein previously did extensive data analysis and research on Google with shocking reported results. He had warned in February 2020 that Big Tech could potentially rig the U.S. election. Epstein also told the Media Research Center in October 2020 that Google was using its search function to mobilize Democrats and undecided voters to flip the Senate.

Conservatives are under attack. Contact Google at (650) 253-000 and demand it provide equal footing for conservatives. If you have been censored, contact us at the Media Research Center contact form, and help us hold Big Tech accountable.