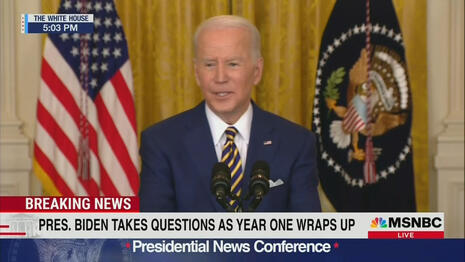 Facebook and Twitter are doing nothing to curb flagrant disinformation spouted by President Joe Biden. During his press conference yesterday, Biden falsely claimed conservatives are already manipulating the 2022 midterm elections.

Biden on Wednesday said that Republicans are engaging in “unconstitutional” attempts to “stack the election and subvert the outcome.” He was apparently referring to legislative efforts by 19 states to bolster election integrity.

Biden’s communications team posted a video of the president’s press conference to the White House Facebook page Wednesday afternoon. But as of 3:39 p.m. EST on Thursday, Meta still hadn’t flagged the recording for election disinformation, contradicting the company’s recent vows to crack down on “election interference.” Facebook didn’t respond to a request for comment.

“What they tried to do this last time out is send different electors to the state legislative bodies to represent who won the election, saying that I didn’t win but a Republican candidate won,” Biden said, according to a transcript of his press conference. “I doubt that anybody thought that would ever happen in America in the twenty-first century, but it’s happening.”

“Accidentally telling someone Independence Day falls on July 3 is misinformation,” she explained in an interview for Harvard Magazine. “When misinformation becomes deliberate—deception on purpose—that’s disinformation.”

Biden engaged in the latter. He championed his party’s federal voting rights bill as the only solution to preventing future voter fraud. “The increase and the prospect of being illegitimate is in direct proportion to us not being able to get these reforms passed,” Biden fussed.

The White House additionally posted the stream on its Twitter page Wednesday, but the platform also failed to indicate any election meddling.

Facebook’s and Twitter’s lack of intervention belies the platforms’ efforts to censor conservatives who questioned the process and results of the 2020 election.

Facebook removed the “Stop the Steal” group in the aftermath of the 2020 election, announced an indefinite suspension of former President Donald Trump after the Jan. 6 Capitol riot and suppressed the distribution of an October 2020 New York Post story outlining alleged corruption between Ukraine and Joe and Hunter Biden.

Along with Facebook, Twitter appeared to work in support of Joe Biden in advance of the most recent presidential election.

The platform censored posts about the Bidens’ dealings in Ukraine, automatically removed a meme mocking Biden’s mental state in the lead-up to the 2020 election and teamed up with Facebook to mass censor a video of doctors’ COVID-19 press conference posted to Trump’s and Donald Trump Jr.’s accounts in the summer of 2020.

White House Press Secretary Jen Psaki told Fox News Thursday morning that Joe Biden “is not predicting that the 2022 elections will be illegitimate,” despite his assertions to the contrary.

Conservatives are under attack. If you have been censored, contact us at the Media Research Center contact form and help us hold Big Tech accountable.