On Friday night, Twitter decided that, without warning, it would temporarily suspend Christina Pushaw, the press secretary for Florida Governor Ron DeSantis. According to a screenshot from Pushaw, the ban will last 12 hours. 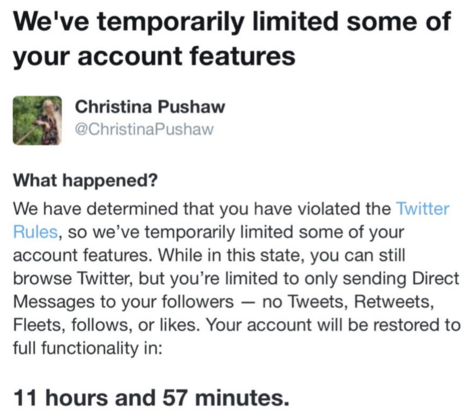 Pushaw was suspended from the platform for twelve hours.

Conservatives were quick to note the hypocrisy, stating that Twitter has not told Pushaw why she was suspended.

“Christina Pushaw, Ron DeSantis’ press secretary, has been suspended by Twitter for 12 hours and was sent this notice about “violating their rules.” They won’t tell her why. Meanwhile, the Taliban is still tweeting freely,” conservative content creator Caleb Hull tweeted.

“Life hack: if you don’t want to risk being suspended on twitter, just put in your bio that you’re a part of the Taliban,” he added, referring to the purported Taliban spokesman that still has an active account on Twitter.

In a slew of recent suspensions, Twitter has suspended multiple prominent conservatives for the same amount of time.

In the past few weeks, notable conservative commentators Erick Erickson and Allie Beth Stuckey were both suspended from Twitter after they said that transgender olympian Laurel Hubbard was “still a man.”

Liz Harrington, Trump’s chief spokeswoman, was also suspended after she tweeted that the 2020 election was stolen from him.