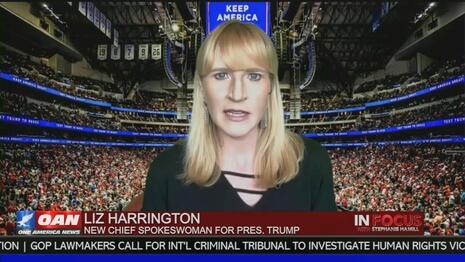 Twitter said the account was restricted because it contained “some unusual activity” and asks users if they “still want to view it.”

Harrington had recently repeated Trump’s allegations of voter fraud online, the same activity that got him permanently banned from the platform after the January 6 riots.

“The Voter Fraud in the 2020 Presidential Election was monumental, and the facts are coming out daily!” Harrington tweeted.

Harrington was quoting from a statement Trump made through his “Save America” committee.

Natalie Harp, a member of Trump’s 2020 advisory board and One America News host, praised Harrington for her tweets.

For its part, Twitter doesn’t seem to be backing down from its Trump ban.

“After close review of recent Tweets from the @realDonaldTrump account and the context around them we have permanently suspended the account due to the risk of further incitement of violence,” Twitter said at the time.

Twitter Safety explained that “we made it clear on Wednesday that additional violations of the Twitter Rules would potentially result in this very course of action,” but did not elaborate on the offending tweet(s).