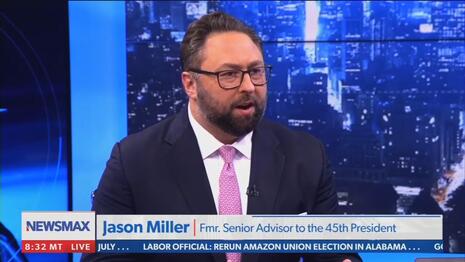 Jason Miller is pushing back after Politico wrote a “hit-piece” about GETTR, his new social media platform.

Miller, who was Senior Advisor to President Donald Trump during both the 2016 and 2020 campaigns, is the Chief Executive Officer of GETTR. Miller says GETTR was founded to stand up against Big Tech censorship.

“GETTR is the marketplace of ideas, and users will not see their accounts canceled for expressing their political opinions,” he said of the platform.

Politico alleged in its article that GETTR was becoming a “safe space” for jihadists, stating it had found “at least 250 accounts” promoting “jihadi material.”

Miller slammed Politico’s article, arguing that it was “funded by GETTR’s competitors in the tech and social media marketplace.”

Miller also said Politico falsely implied that extremism online was only a problem for GETTR and not other platforms like Facebook or Twitter. He added that GETTR’s fight against Islamist extremism was “continuous.”

“We do have a strong and proactive moderation policy that does not tolerate threats or intimidation; bullying, harassing, or stalking; homophobic, racial, or sexual slurs; encouraging criminal or illegal behavior; encouraging self-harm; sharing of another person’s private information; doxing; sexually explicit content; spamming; or content depicting excessive violence.”

He further criticized Politico for neglecting to include his full comments on combatting online extremism.

“ISIS is trying to attack the MAGA movement because President Trump wiped them off the face of the earth, destroying the Caliphate in less than 18 months, and the only ISIS members still alive are keyboard warriors hiding in caves and eating dirt cookies,” Miller told Politico in a quote that was not fully included in the article.

Still, Miller says he is not intimidated by what he says is an effort by Big Tech to undermine alternative social media channels.

“GETTR has made gains in the social media universe that undeniably make us a lasting player,” he concluded. “We offer superior technology, with longer posts and higher quality picture and video features, and a better user experience, than many other platforms.”

“One hit piece in a Washington, D.C. Beltway rag isn’t going to change that, but it looks like Politico and Big Tech gave it a try anyway.”