“Twitter has a purpose and relevance that impacts the entire world. Deeply proud of our teams and inspired by the work that has never been more important,” Agrawal announced in an April 25 tweet. His post quote-tweeted a statement from Twitter's Independent Board Chair Bret Taylor announcing: “The Twitter Board has reached an agreement with @ElonMusk.” Part of what made the tweet so noteworthy was that Agrawal had not made a post via his account since April 10.

Agrawal's previous tweet had declared that “Elon has decided not to join our board.” Agrawal at the time also warned his employees in a brief memo: “There will be distractions ahead, but our goals and priorities remain unchanged. The decisions we make and how we execute is in our hands, no one else’s. Let’s tune out the noise, and stay focused on the work and what we’re building. 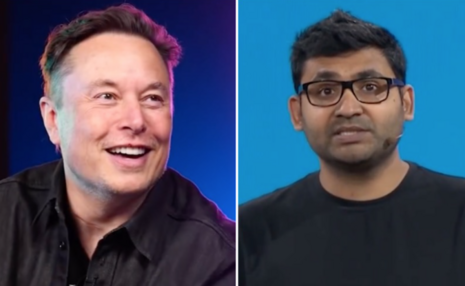 Taylor’s announcement linked to a press release about the platform’s agreement with Musk. The piece quoted Taylor: "The Twitter Board conducted a thoughtful and comprehensive process to assess Elon's proposal with a deliberate focus on value, certainty, and financing. The proposed transaction will deliver a substantial cash premium, and we believe it is the best path forward for Twitter's stockholders."

The release also quoted Musk as he declared, "Free speech is the bedrock of a functioning democracy, and Twitter is the digital town square where matters vital to the future of humanity are debated." He also noted that “I also want to make Twitter better than ever by enhancing the product with new features, making the algorithms open source to increase trust, defeating the spam bots, and authenticating all humans. Twitter has tremendous potential – I look forward to working with the company and the community of users to unlock it."

Agrawal’s acknowledgement of Musk's victory was critical because of Agarawal’s past statements indicating he would steer Twitter toward more censorship. In a Nov. 18, 2020, interview with MIT Technology Review Editor-in-Chief Gideon Lichfield, Twitter’s then-Chief Technology Officer Agrawal was asked how Twitter could both censor so-called misinformation from its platform and still allow free speech. “Our role is not to be bound by the First Amendment, but our role is to serve a healthy public conversation.”

By contrast, Musk shared a completely different idea when he tweeted April 25: “I hope that even my worst critics remain on Twitter, because that is what free speech means.”

The Verge senior reporter Alex Heath announced in a tweet that an upcoming event will give further insight on Twitter's future: "Twitter’s @paraga and @btaylor will host an all hands for employees at 2pm Pacific today to address the news, per internal memo. 'I know this is a significant change and you're likely processing what this means for you and Twitter's future,' Parag writes."