Republican House Minority Leader Kevin McCarthy reportedly called for Trump to resign and for his supporters who questioned the election to be silenced by Big Tech.

Et tu Brute? “During the same Jan. 10 conversation when he said he would call on Mr. Trump to resign, Mr. McCarthy told other G.O.P. leaders he wished the big tech companies would strip some Republican lawmakers of their social media accounts as Twitter and Facebook had done with Mr. Trump,” The New York Times reported April 21. The Times based its analysis on a tell-all book, “This Will Not Pass: Trump, Biden and the Battle for America’s Future,” which reportedly “draws on hundreds of interviews with lawmakers and officials, and recordings of private conversations.” McCarthy reportedly responded to Republicans sharing their so-called “‘paranoia about the 2020 election’” online by saying: “‘We can’t put up with that.’” McCarthy added:  “‘Can’t they take their Twitter accounts away, too?’” 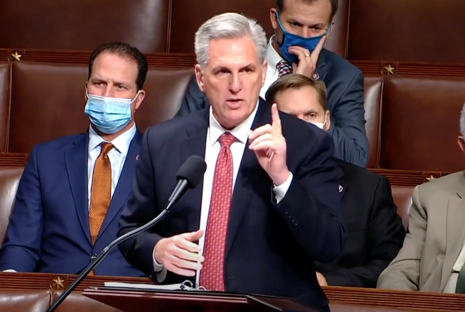 McCarthy’s official Twitter account responded to the allegations with a statement proclaiming on Twitter that “The New York Times’ reporting on me is totally false and wrong.” He said that “our country was better off when President Trump was in the White House.”
However, as The Times observed: “the recording tells a different story.” The Times shared a conversation that included McCarthy discussing then-President Donald Trump and suggesting: “[I]t would be my recommendation that [Trump] should resign.”

Business Insider analyzed what the apparent two-faced politics means for his credibility as a Republican leader:

“If true, McCarthy's private desire flies in the face of his public push to rein in large tech companies in the wake of the platforms booting then-President Donald Trump following the Capitol riot. Twitter said at the time that it booted Trump ‘due to the risk of further incitement of violence.’"

McCarthy spokesperson Mark Bednar reportedly claimed in response to The Times’ reporting that McCarthy "’never said that particular members should be removed from Twitter.’"

Many conservatives not only believe that the election was stolen, but that Big Tech deliberately meddled in favor of the Democratic party. Big Tech censored the New York Post bombshell exposing Hunter Biden’s so-called “Laptop From Hell.” The Media Research Center commissioned a poll indicating that enough Biden voters to swing the election would have voted differently if Big Tech and Big Media hadn’t censored news about  the Biden family’s shady business dealings in foreign lands.

“It is an indisputable fact that the media stole the election. The American electorate was intentionally kept in the dark. During the height of the scandal surrounding Hunter Biden’s foreign dealings, the media and the big tech companies did everything in their power to cover it up. Twitter and Facebook limited sharing of the New York Post’s reports, and the liberal media omitted it from their coverage or dismissed it as Russian disinformation.”