At it again? Former Democratic presidential candidate and Hawaii Rep. Tulsi Gabbard torched Big Tech companies, saying she was censored again for cautioning against the U.S. going to war.

Fox News’s Ingraham Angle host Laura Ingraham asked Gabbard in a late March interview: “Why is calling out what many have called the Military Industrial Complex now offensive to Big Tech?” Gabbard acknowledged that a previous interview of hers was censored with multiple filters, but also said she was censored yet again: “Just before coming on your show today, I found out that Instagram, which is owned by Facebook, is also suppressing my voice.” She said her reach on the platform for that particular post shrunk by approximately 90 percent.

Gabbard described how censorship is part of the machinery used by Big Tech, Big Media and the political establishment to control the narrative.

“It is yet another example of this larger machine that is very clearly at work that is controlling our marketplace of ideas,” she said. “It’s made up of these big social media tech giants. It's made up of the politicians, the powerful politicians from both parties in Washington, the Military Industrial Complex, people who feel directly challenged when anyone dares to question their narrative.”

Ingraham shared a Fox News poll explaining that 55 percent of Americans were against providing “substantial military aid” for Ukraine if it risks the U.S. going to war with Russia.

“I guess these Big Tech censors are happy to censor the views of the majority of Americans,” Ingraham said.

Part of the reason Americans are against the war has to do with “what is at stake when you pit two nuclear powers against each other,” Gabbard said.

Gabbard had previously slammed Big Tech for censoring her last interview with Ingraham about the war in Ukraine.

Ingraham asked Gabbard in that interview earlier this month: “Why are we talking about no-fly zones instead of the fact that for the first time, we have President Zelensky stepping back from his earlier NATO wishes and even demands?” 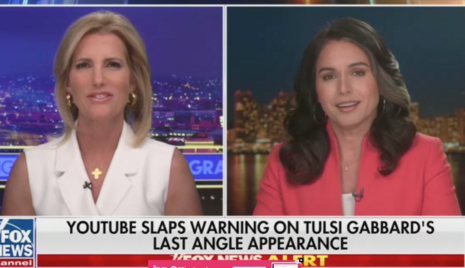 Gabbard said few people are discussing a statement by Ukrainian President Volodymyr Zelensky on ABC News indicating he may be open to setting NATO membership aside and negotiate directly with Russian President Vladimir Putin.

YouTube censored the Fox News video with two filters: one suggesting that “This video may be inappropriate for some users,” requiring viewers to click or even sign in to verify their age, according to Gabbard’s video. Another filter claimed “the following content has been identified by the YouTube community as inappropriate or offensive to some audiences.”