Facebook’s approved fact-checker PolitiFact rated a graphic from the Media Research Center as “FALSE,” even though the image merely shared a chart from the Center for Disease Control.

Facebook’s trusted flagger PolitiFact came after the Media Research Center (MRC) for citing a graphic first released by the CDC. “A conservative group that focuses on exposing what it describes as leftist bias in the news media misled its Facebook audience by claiming that fewer than 2,000 people are currently hospitalized in the United States with COVID-19,” Politifact reported.

PolitiFact executive director Aaron Sharockman informed the Media Research Center: “We will soon be publishing a fact-check of this image.” The Facebook fact-checking partner acknowledged that “[t]he image cites the CDC, and we were able to locate the same data,” but claimed that it did not have appropriate context: 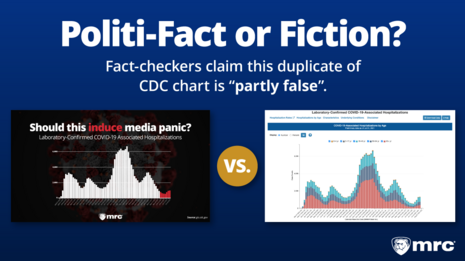 MRC spokesperson Iris Miller explained to PolitiFact that “This is the same chart that is on the CDC's website, found at: https://gis.cdc.gov/grasp/covidnet/COVID19_5.html,” and quipped, “If you disagree with the data or the chart, you should fact-check the CDC.” 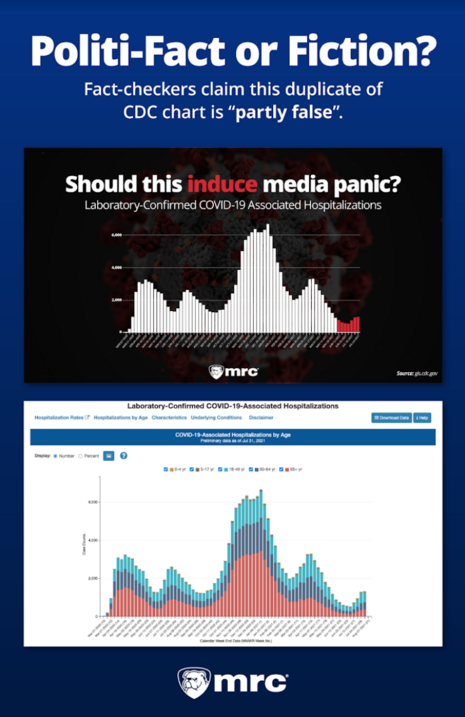 PolitiFact acknowledged that “while the Media Research Center copied the CDC data accurately, it failed to include a very important CDC-issued disclaimer.” Claiming to need a five-paragraph disclaimer for merely citing a graphic from a major institution is the new rule now apparently. PolitiFact tried to combine three fact-check categories into one. It failed to note its issue as one of context, and chose to instead label the entire graphic as “FALSE,” but called it “partly false information” on Facebook.

PolitiFact’s ham-handed approach to censorship is no surprise. PolitiFact Editor-in-Chief Angie Drobnic Holan once wrote a piece for Poynter suggesting that America’s salvation is more censorship.

“We’ve entered an intense period where false words are inspiring violent deeds,” Holan exclaimed in the opening remarks of her piece condemning free speech. “Opinion: To control online misinformation, we need real-world solutions,” expressed repeated outrage over conservatives questioning the 2020 election and the Capitol riot. Holan’s self-righteous condemnations conspicuously ignored mentioning 2020’s summer of left-wing violence and years of the phony leftist Russia collusion narrative. She went on to call for a solution for misinformation from “every sector of society,” particularly “from technology companies and government.”

Facebook has a history of choosing poor arbiters of truth. Big Tech platforms like Facebook have raised the World Health Organization (WHO) as the gold standard of COVID-19 information. The hapless WHO misinformed the world about the virus’s capability to be transmitted from human to human on behalf of China, so that China could get a head start on hoarding supplies, according to the DHS report in the AP’s coverage. Allowing PolitiFact to slime the MRC for using a CDC graphic is yet another case of leftist bias.