Rep. Jim Jordan (R-OH) and former White House Chief of Staff Mark Meadows warned that conservatives should be skeptical of a Democrat-led effort to shape how Big Tech impacts the United States.

The enemy of your enemy is not always necessarily your friend, conservative leaders warn. Jordan and Meadows acknowledged that Big Tech is “out to get conservatives,” but warned “the answer is not to marry Big Tech to Big Government,” in a June 22 Fox News op-ed. They suggested the new bills from Democrats would be “a takeover of our economy by the woke elites” and “would do nothing to actually address anti-conservative bias and censorship.” They cautioned that missteps will lead to a grim future: “[J]ust wait until Apple, Amazon, Facebook and Google are working in collusion with Big Government.” 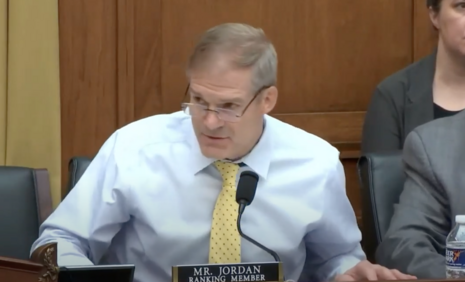 The “scariest” bill they said “sets up secret committees at the Federal Trade Commission that would manage data practices of the largest tech companies.” The opinion piece specified some organizations that could be involved:

“These committees would include members of the targeted companies (i.e. Google, Facebook), their competitors, a ‘competition or privacy advocacy organization’ (i.e. groups like Planned Parenthood), and academics (think Elizabeth Warren acolytes).”

Another bill, they warned, “tells Big Tech companies that if they want to invest in any other companies, they will face more scrutiny.” They noted that while the such legislation may sound good at first, it means companies must get permission from left-wing bureaucracy: “Imagine the largest companies in the world needing to appease their woke overlords in the Biden administration before funding a new start-up.” Some memories of recent government tampering still sting conservative memory:

“Remember when Tea Party groups were sidelined by Lois Lerner at the IRS? Remember when the Obama-Biden administration weaponized the Justice Department to target the Trump campaign? This bill creates every incentive for Big Tech to take similar anti-conservative actions on behalf of Big Government.”