“Did the media and social media conspire together to keep information about Joe Biden and Hunter Biden’s relationship with foreign energy companies out of the media?” Brand asked in a preview video for his podcast. “The answer is: yes, they did.” Brand shared clips from his interview with Greenwald about corruption in the media.

“[R]evelations that there are financial connections between energy companies in the Ukraine, energy companies in China, and the Biden family, are troubling,” Brand explained. “That should be public knowledge. And it’s even more troubling that Twitter and Facebook and the media at large deliberately kept it out of the news because they didn’t want it to influence the election.” 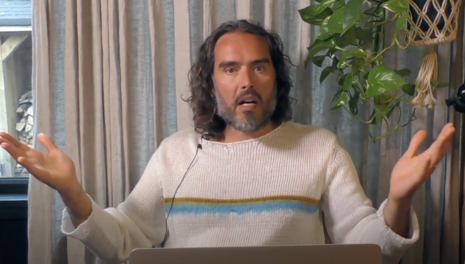 Brand warned that while he does not consider himself to be a supporter of former President Donald Trump, the alliance that Democrats have with Big Tech corporations is a dealbreaker:

As I’ve said, Donald Trump, you know, that’s, I don’t think Donald Trump’s the answer. But I’m sad to realize that I can no longer even claim to believe that Joe Biden or the Democratic Party might be the answer, because look at how they behave. And look at the relationships between media, social media and [the Democratic Party]. They conspired to keep information away from you because it was not convenient to their agenda.

He shared a clip from the interview where Greenwald recounted Big Tech’s election meddling to suppress the Hunter Biden story. The shocking revelation released by the New York Post on Oct. 14, 2020, cited purported emails from Democratic presidential candidate Joe Biden’s son Hunter and reportedly exposed the alleged scandalous dealings of both father and son in the Russia-bordering state of Ukraine. Greenwald explained that Twitter “banned any mention of this story.”

Twitter followed Facebook’s lead and disabled links to the story in October, mere weeks before the election. Greenwald recounted how the Hunter Biden scandal was restricted “not just for publicly tweeting but even if you wanted to have a private conversation using the chat function on Twitter, you couldn't link to the [story]. It was just censored. It was banned, like you were in China.”

The media blackout on the Hunter Biden scandal was a political game changer with dire implications. A post-election poll from the Media Research Center, conducted by McLaughlin & Associates, showed that 36 percent of Biden voters were NOT aware of the evidence linking Joe Biden to potential corrupt financial dealings with China through his son Hunter. Thirteen percent of these voters (or 4.6 percent of Biden’s total vote) said that had they known these facts, they would not have voted for him.

Conservatives are under attack. Contact your local representative and demand Big Tech be held to account to mirror the First Amendment. If you have been censored, contact us at the Media Research Center contact form and help us hold Big Tech accountable.