Open Letter from Senators Puts Big Tech on Notice: A Storm Is Coming

The open letter summarized how Section 230 works, arguing that it, “shields social media platforms from the liability imposed on publishers when they act in ‘good faith’ to restrict access to or remove certain objectionable materials.” It was sent by Sen. Marco Rubio (R-FL), Sen. Josh Hawley (R-MO), Sen. Kelly Loeffler (R-GA), and Sen. Kevin Cramer (R-ND).

The letter declared that the time had come, “to take a fresh look at Section 230 and to interpret the vague standard of ‘good faith’ with specific guidelines and direction.” In addition, the senators announced their intent to examine the current interpretations of Section 230: 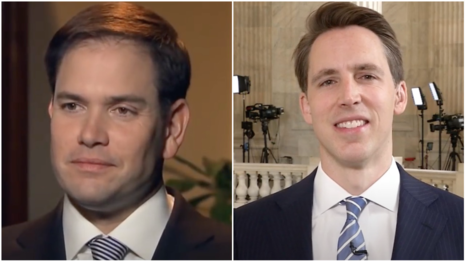 “We therefore request that the FCC clearly define the framework under which technology firms, including social media companies, receive protections under Section 230.”

The crux of their argument is that Big Tech companies appear to not be acting in “good faith” as neutral platforms to foster robust public conversation:

“While social media companies enjoy their special status under Section 230, it is questionable that they are living up to their obligations when they blur the lines between distributor and publisher by favoring one political point of view over another.”

The accusations scorched Big Tech companies for not only interfering with American ideals of free speech, but for even meddling in the lives of everyday Americans who have little power to fight back:

“While the President has the means to push back on unfair treatment, we worry about everyday Americans who are sidelined, silenced, or otherwise censored by these corporations. Social media companies, whose protections come from their acting as distributors, not publishers, have increasingly engaged in partisan editorializing, censorship of Chinese dissidents, and a host of politically motivated speech policing.”

The Department of Justice also has its eye on Section 230’s immunity provisions for Big Tech.

Attorney General William Barr explained in an exclusive interview on Fox News show Special Report that he believes social media platforms are "engaged in censorship" and behaving like "publishers.”

When host Bret Baier asked Barr if he believes social media companies are “censoring the president and his supporters,” Barr gave a damning response:

"I think there are -- clearly these, these entities are now engaged in censorship. And they originally held themselves out as open forums where people, third parties could come and express their views, and they built up a tremendous network of eyeballs.”

Barr added one detail that may be a game changer in the battle against Big Tech. He theorized that “they are acting much more like publishers because they're censoring particular viewpoints and putting their own content in there” he suggested “to diminish the impact of various people's views."