Senator Marco Rubio (R-FL) appeared to be very unhappy with China’s new stake in TikTok. He called on the Biden administration to “take immediate action” to block the platform and its parent company ByteDance from operating within the United States.

Rubio said in a press release on Aug. 17 that “it is past time” for the U.S. to begin “acting on this threat” and ban the platform from operating within its borders. He pointed out that U.S. allies “such as India have already come to this conclusion” last year. 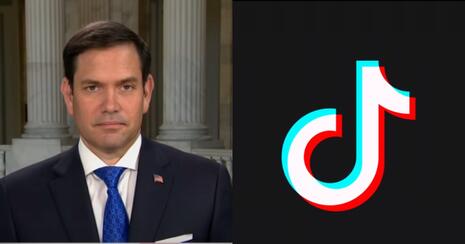 The senator emphasized the dangers that TikTok poses. “The Biden Administration can no longer pretend that TikTok is not beholden to the Chinese Communist Party,” Rubio said in the press release. “Even before today, it was clear that TikTok represented a serious threat to personal privacy and U.S. national security. Beijing’s aggressiveness makes clear that the regime sees TikTok as an extension of the party-state, and the U.S. needs to treat it that way.”

ByteDance is the parent company of TikTok. The company sold a 1 percent stake to WangTouZhongWen Technology, a Beijing company owned by three state entities in China, on April 30. The deal reportedly allows the Chinese Communist Party to appoint a director to ByteDance’s board.

The Biden administration isn’t oblivious to the threat TikTok poses.

The Biden campaign sent an email to staffers telling them to delete the app from their devices, according to Axios. Axios politics reporter Sarah Mucha stated in a tweet that she “Confirmed” that the “@JoeBiden campaign sent an email to staff asking them to remove TikTok from their work and personal devices due to security concerns, per a source in the campaign.”

Even the liberal CEO and co-founder of Reddit, Steve Huffman, blasted TikTok as “fundamentally parasitic” and warned people considering the app, “Don’t install that spyware on your phone.”

A Trump administration executive order originally attempted to ban TikTok by removing it from app stores, but the move was sidestepped by TikTok after a judge granted an injunction that allowed the platform to remain operable in the U.S. TikTok argued that banning it from Apple’s and Google’s app stores violated its First and Fifth Amendment rights in the U.S. Constitution, according to BBC News.

President Joe Biden eventually revoked the Trump-era executive order that banned communist Chinese-owned apps like TikTok and WeChat. He replaced it with his own “Executive Order on Protecting Americans’ Sensitive Data from Foreign Adversaries,” which his administration claimed establishes new criteria for determining whether foreign-owned apps constitute a threat.