Former President Donald Trump did not take the recent decision by the Facebook Oversight Board lying down. Trump blasted Big Tech as “a total disgrace” in a statement following the Board’s decision to at least temporarily uphold a ban on his account. 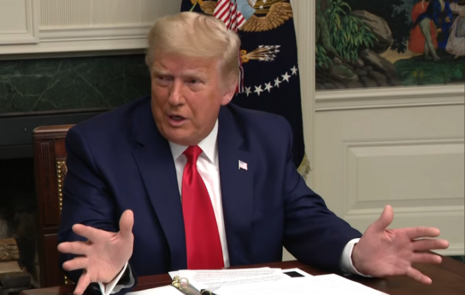 “What Facebook, Twitter, and Google have done is a total disgrace and an embarrassment to our Country,” Trump said in a statement released on his new website, From The Desk of Donald J. Trump. “Free Speech has been taken away from the President of the United States because the Radical Left Lunatics are afraid of the truth, but the truth will come out anyway, bigger and stronger than ever before.”

Trump then encouraged Americans to hold Big Tech accountable for meddling in the election process. He declared, “The People of our Country will not stand for it! These corrupt social media companies must pay a political price, and must never again be allowed to destroy and decimate our Electoral Process.”

Trump was initially suspended from Facebook for 24-hours, for purportedly inciting the chaos at the U.S. Capitol on Jan. 6 with his social media postings. The next day, CEO Mark Zuckerberg released a statement indicating the platform would be “extending the block” it placed on Trump’s Facebook and Instagram accounts “indefinitely.”

The Board, an outside group funded and created by Facebook to review the platform’s most controversial policy decisions, decided to uphold the platform’s ban of former President Donald Trump. But with limits.

The Board, which is 75 percent international, insisted that Facebook review the decision within six months because it failed to impose a proper penalty. “[I]t was not appropriate for Facebook to impose the indeterminate and standardless penalty of indefinite suspension,” according to the Board’s case summary.

Conservatives have decried the Oversight Board’s ruling, slamming the notoriously liberal Board and Facebook alongside Trump.

Media Research Center Founder and President L. Brent Bozell suggested that the ruling could be Facebook’s first foray into meddling with the 2024 Election. Senator Ted Cruz (R-TX) summarized the ruling as “disgraceful.”