American billionaire and co-founder of Microsoft, Bill Gates, said Parler is a haven for the promotion of conspiracy theories.

New York Times columnist Andrew Sorkin hosted a Nov. 17 discussion at The New York Times’ virtual DealBook Summit, which included a discussion with Gates and others that touched on issues related to vaccine confidence. When asked by Sorkin about the regulation of social media and the rise of Parler, Gates remarked that users who migrate to the Twitter alternative are essentially “saying, I like crazy stuff.” 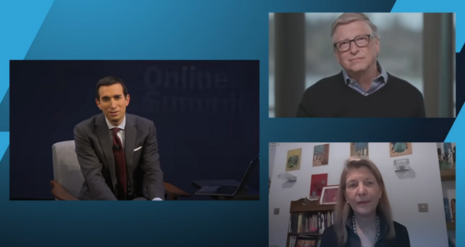 “So you’re not taking a mainstream thing that's part of how a family stays in touch, and is used for a variety of things. You’re literally going over to, ‘Hey, what’s the craziest thing that anybodies saying?’” Bill Gates said. “If you want Holocaust denial, hey Parler’s going to be great for you.”

Throughout his response to Sorkin’s question, Gates glossed over the free speech concerns that led to Parler’s creation. Gates also suggested that Parler isn’t truly a viable alternative to the already established social media giants. “Facebook services are the primary way people access news, and they get drawn in to more and more extreme stories, including some of these anti-vaccine or conspiracy things,” said Gates, “and so it’s that person who hasn’t started out saying ‘I want crazy stuff,’ they get drawn down and see things that are very titillating.”

“It’s almost a human weakness,” Gates said of people who are going to Parler to access alternative media that corporate media and Big Tech are trying to silence.

Gates isn’t the only one frustrated with Parler’s popularity. Bridget Barrett, the lead researcher for the digital political ads project at the Center for Information, Technology and Public Life (CITAP), said the platform’s free speech approach causes “harms” to “democracy.”

However, Gates’s comments are ironic, considering some of his opinions about the coronavirus could be considered crazy themselves. When asked by CNN anchor Fareed Zakaria if China was at all to blame for the coronavirus, he rebuked the notion, and said, “China did a lot of things right.” In stating that China did things right, Gates ignored the “significant delays” from China of the distribution of crucial information needed to help fight the spread of the virus. This revealing information about China’s handling of the coronavirus was uncovered by the Associated Press, and it isn’t the only early blunder from China that American press outlets have reported.

Following increased censorship around the election, many conservative voices have urged their audiences to transition to Big Tech alternatives like Parler, and YouTube alternative Rumble. Fox News host of Life, Liberty & Levin, Mark Levin, has even said he may be leaving Facebook entirely after the reach of his page was repeatedly throttled due to his sharing of information that Facebook’s fact-checkers deemed was “missing context.”

Conservatives are under attack. Contact your local congressional representative and demand that Big Tech be held to account to mirror the First Amendment while providing transparency, clarity on “hate speech” and equal footing for conservatives. If you have been censored, contact us at the Media Research Center contact form and help us hold Big Tech accountable.