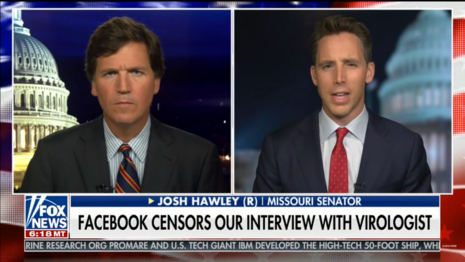 American’s rights online have been trampled by major tech companies who have leveraged favorable government policy to suppress or censor user’s content without fear it will come back to hurt them.

“Big Tech has shelled out enormous sums of cash to buy influence in Washington,” Hawley told Carlson. “It’s been very successful. I’ve seen that with my own eyes on Capitol Hill.”

Hawley described Big Tech’s influence as a “juggernaut,” within the Washington establishment. “But you know what, the American people are tired, I think, of Big Tech having all the power and them having none.”

Currently, under a provision of Section 230 in the Communications Decency Act, Big Tech platforms are immune from legal liability for the content posted by its users. This has led to free rein for companies like Twitter, Facebook and Instagram to do whatever they want to user’s content on their platforms without any fear of consequences.

Big Tech has a “hammer-lock” on election information, said Carlson. “What can we do to throw off [Big Tech’s] control and restore freedom of speech and thought and inquiry in this country before [the election]?”

“We can let people sue, Tucker,” said Hawley. “Right now they can’t, they can’t sue. Nobody can. If you get discriminated against on the basis of speech by these platforms, you have no recourse because of the law that Congress has written.”

Hawley described Section 230’s protection of Big Tech as, “the heart of the sweetheart deal that Big Tech gets from Big Government.” Lifting that liability is how Americans can take back some semblance of power from Big Tech companies over what they say online.

In May, President Donald Trump signed an Executive Order aimed at clarifying Section 230, to withdraw Big Tech’s immunity. The order argues that tech firms forfeited protection under Section 230 once they started interfering with users' speech.

Hawley said American’s are “tired of Big Tech, the capital of WOKE,” having so much power over what they think, what they say and what they can read.”

“There’s nothing that politicians respond to like voters,” he added. “Voters are demanding change.”