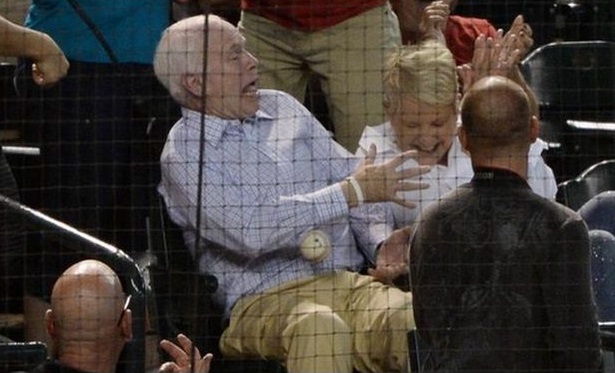 When cruelty and ignorance meet …

Tuesday night, U.S. Senator John McCain, decided to take in a Diamondbacks game. During the game, a foul-ball was hit toward him. McCain, 78, failed to come down with the catch.

No biggie, right? Lots of 78 year olds would struggle to catch a near, rock-hard baseball that suddenly attacked them while they relaxed in their seats.

But the internet would cut the septuagenarian no such slack. Sports Illustrated took a shot at McCain …

The article the tweet linked to stated, “Still, this photo from Dodgers photographer Jon SooHoo does not make the former presidential candidate look particularly athletic.”

That bit has now been quietly cut from the article. Good thing too. The reason McCain doesn’t appear to be “particularly athletic,” because he is physically unable to raise his arms above a certain level.

He broke both of his arms while being shot down over Vietnam, and since the North Vietnamese were so much more excited about torture than they were about providing quality medical care, over the next five years of McCain’s imprisonment his arms deteriorated to a point where they could no longer be properly used. Other politicians don’t have that excuse.

The media staff at SI could just consider pulling their heads out of a football every now and again. Considering McCain ran for President less than ten years ago, all this information was public. But hey, he’s a Republican so … meh … fair game.