ABC’s Moran: Reaction to Gay Marriage Decision Was a ‘Deep Cheer’ ‘Like a Spark of Fire’

During ABC’s Special Report on the Supreme Court’s decision to legalize gay marriage, correspondent Terry Moran gushed that the reaction to the ruling by the crowd gathered outside the Court was akin to “a spark of fire as we understood what was actually done here” as “those interns ran across the plaza.”

Asked for the mood outside the Court by World News Tonight anchor David Muir, Moran noted that there were “thousands of people out here” and “there wasn’t quite the suspense and drama in the air that there was a few years ago,” but then quickly descended into fawning descriptions of the crowd.

Moran also hailed how “[t]he country’s moved so fast on this subject,” and described the immediate approval among the crowd as  “a deep cheer” that “went right up through the thousands of people.”

While he added that “[t]here are people here not happy with this opinion” and specifically those “who believe that their faith tradition or their fundamental belief about marriage and family...contradicts that,” the ABC News correspondent maintained that: “[T]he vast majority of people here were very happy and you could feel it in a special way. A historic moment.”

Karl went on to claim that the President had “evolved over that time” on gay marriage from when he first ran for president in 2008, but failed to mention the claims made in February by former senior adviser David Axelrod that Obama had actually lied about his opposition to gay marriage during that time.

The relevant portions of the transcript from the ABC News Special Report on June 26 can be found below. 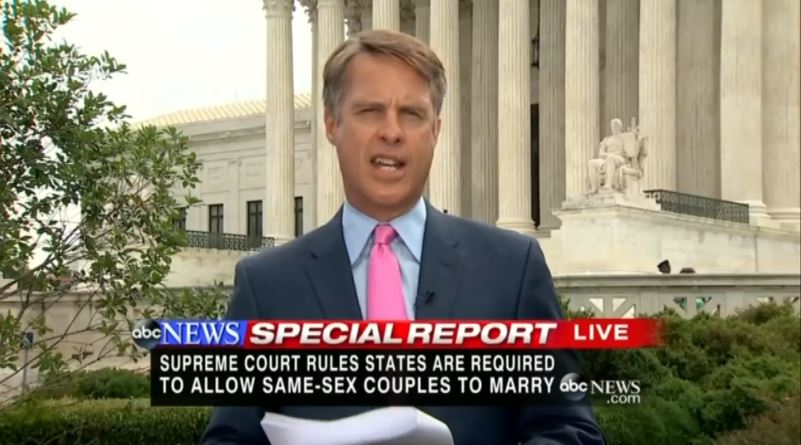 TERRY MORAN: There are thousands of people out here and I felt as I walked up there wasn't quite the suspense and drama in the air that there was a couple of years ago. The country's moved so fast on this subject it almost felt – a little bit less intense but when the decision came down, and those interns ran across the plaza, and you got a sense, almost like a spark of fire, as we understood what was actually done here in this opinion, a cheer – a deep cheer went right up through the thousands of people. There are people here not happy with this opinion, of course. People who believe that their faith tradition or their fundamental belief about marriage and family, that this contradicts that, but the vast majority of people here were very happy and you could feel it in a special way. A historic moment. 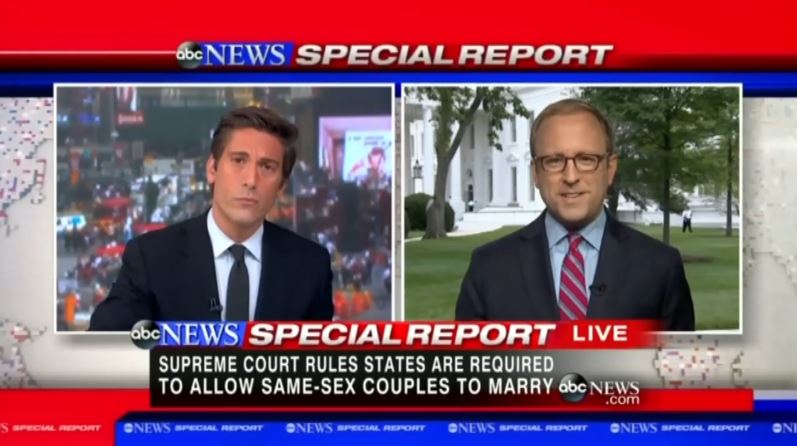 MUIR: Jon, I want to get to this number because this is key. In the most recent ABC News polling, 61 percent of Americans, more than 6 in 10, for the first time said same-sex marriage should be legal in this country and that's a sea change. You know, we cover lots of policy here, but we have never seen it this quickly, at least in recent memory. Just less than a decade ago, just 36 percent said they supported same-sex marriage and a lot of people are pointing to President Obama and what he said with our own Robin Roberts not long ago in his administration, saying that he believed even his own beliefs had evolved on this.

JONATHAN KARL: Oh, there’s no question. This is the biggest sea change we have seen on major cultural issue, certainly in my lifetime, certainly in our lifetimes. This is being celebrated at the White House. That sea change is embodied in President Obama himself. When he ran for President the first time in 2008, he was opposed to same-sex marriage. He was against it and now, he has evolved over that time. First coming out in that interview with Robin Roberts and even more recently, because when the last same-sex marriage case went before the Court, the White House stopped short of arguing for a constitutional right to marry for same-sex couples. This time, they were fully on board. They were rooting for this decision[.]