The magazine GQ released its list of the “20 craziest politicians” in the U.S. on Tuesday and, not surprisingly, the liberal publication selected 17 Republicans for the list compared to only three Democrats. 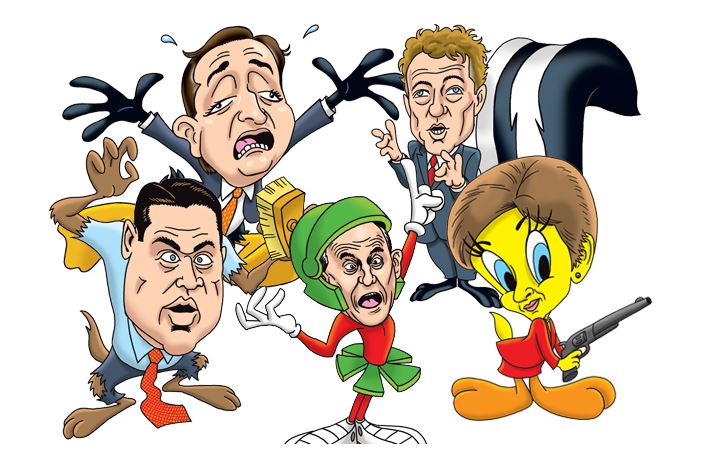 The writer of the piece, Stephen Sherrill, introduced the list this way:

How do you feel about facts? Do you hate them? Are they super annoying, like science? Are you frightened of communists, Muslims, and vaginas? Good news! This month, America is inaugurating a new class of elected representatives, and while some of them are bright, able politicians, a few of them are seriously looney. And they'll be in good company

In the entry about Paul, Sherrill listed under the label of “just how crazy” how Paul warned of a “borderless mass continent” in North America if illegal immigration is not addressed and suggesting the Obama administration consider during the BP oil spill “that maybe sometimes accidents happen.”

For Ernst, Sherrill labeled her as one of five Republicans who were “fresh-crazy” and urged readers to: “Think of Her as: Michele Bachmann with a more sensible haircut.”

Accompanying Sherrill’s entry, illustrator Ward Sutton drew Ernst as a female Tweety Bird in pantsuit and holding a gun with the caption: “Iowa’s Ernst learned her way around a hog as a child.”

Speaking of illustrations, Sutton drew Cruz with Daffy Duck-like feet and hands who was running away and crying. “We’re pretty sure Cruz would’ve been disappointed if he wasn’t on the list, so: This one’s for you Ted,” read the caption.

The liberal GQ writer was “just how crazy” that Cruz “[l]eans so far right that even fellow Republican John McCain classified him as a ‘wacko bird’.” While Sarah Palin was not on the list, she made an appearance in Cruz’s entry as someone who readers should “think of him” as with the difference being “if one of the five colleges she attended had been Princeton.”

At the bottom of the article, Sherrill tried to dismiss the emphasis on Republicans as not a piece of “standard liberal media bias” because a handful of Democrats had previously made the list:

Look! A Democrat! Yes, this list is Republican-heavy, and while that may seem like standard liberal-media bias, the reality is that Democrats just aren't keeping pace right now in the crazy department. But to even the score, here's an incomplete list of crazy Dems from yesteryear: Rod Blagojevich, David Duke, at least one or two of the Kennedys, Anthony Weiner/Carlos Danger, and Jim McGreevey.