Maddow Blasts Dems For Allowing GOP to Control 30 State Legislatures; ‘Do You Guys Have a Catch-Up Plan?’

At the conclusion of her MSNBC show on Thursday night, Rachel Maddow was absolutely beside herself over the fact that Republicans made massive gains in state legislatures across the country and excoriated Democrats for appearing to have no such strategy or interest in winning seats on the state level.

Following Tuesday’s midterm elections, Republicans gained a total of 310 seats in states from coast to coast and, by Wednesday, the GOP will completely control 30 of the 50 state legislatures in the country (by early next year) with Democrats having less than ten now to their credit. [MP3 audio here; Video below]

Republicans actually controlled 29 state legislatures by the end of Election Day on Tuesday, but Maddow pointed out that the number grew to an even 30 following the move by a Democratic State Senator in West Virginia to change his party affiliation from Democrat to Republican and thus gave Republicans the State Senate (as it had been a previous tie at 17-17).

At that point, the liberal host held little back in showing her disapproval for Democrats falling remarkably short at the state level:

Complete Republican legislative control in 30 states and we've only got 50 states. Elections, consequences. Democrats, do you guys have a catch-up plan for the states here or what? Because the trend here is obliterating.

The full transcript of the closing segment on MSNBC’s The Rachel Maddow Show on November 7 can be found below. 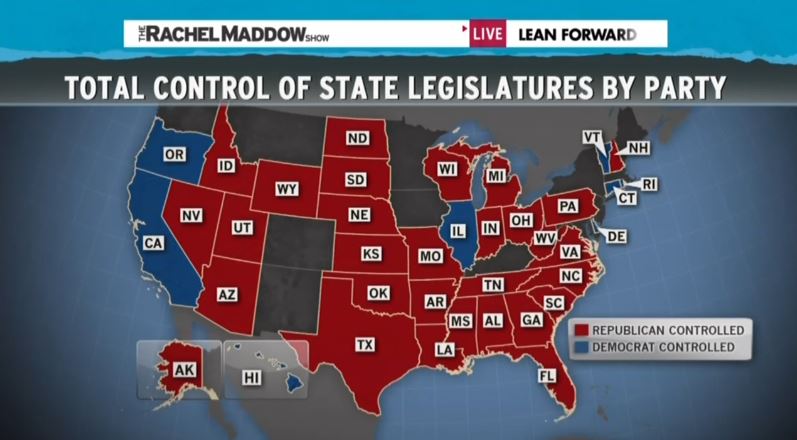 RACHEL MADDOW: Alright, chart imitates life. Are you ready? 2010, the last time the Republicans had a huge mid-term year, they took more seats in state legislatures than at any time since 1928. How many times have we said that in terms of explaining what's been going on in the states for the last four years. They just ran the table in terms of taking over the states. Well, Tuesday this week, Republicans increased their control over state governments. They took another, oh, 310 seats in state legislatures. So, look at what that means right in terms of overall control in the states. Right now, when it comes to total control of state legislatures, one party having majority in the whole state legislature, there are eight states now under complete democratic control – Oregon, California, Hawaii, Illinois, Vermont, Rhode Island, Connecticut, Delaware. They all have legislatures that are all blue, eight of them, as opposed to 29 of them that are totally red. As of the close of the polls on election night, the Republican Party had control of state legislatures in 29 states. 29 out of 50 states. You know what? Then today, let's make it an even 30. Overnight last night, a State Senator in West Virginia, a Democrat, left the Democratic Party and flipped his registration to Republican. In West Virginia, the State Senate had been a tie between the two parties, but him switching flips control of the Senate there to the Republicans. Republicans also got control of the State House in West Virginia on Tuesday night for the first time in 83 years. So, with the House going and that one party-switching Senator, his name is Daniel Hall. With that decision, he made West Virginia the 30th state in the country Republicans now control both houses of the legislature. Complete Republican legislative control in 30 states and we've only got 50 states. Elections, consequences. Democrats, do you guys have a catch-up plan for the states here or what? Because the trend here is obliterating.