During the 8:30 a.m. half-hour of NBC’s Today on Monday, Matt Lauer interviewed far-left actor Russell Brand and gave him ample opportunity to promote his new book and what Lauer described as his “big thoughts on big issues,” ranging “from drug laws and voting to the redistribution of the wealth around the world.”

Substitute co-host Tamron Hall gushed that Brand’s book is “funny and, as always, thought-provoking” just prior to the four-and-a-half minute interview in which Lauer and Brand discussed his calls to legalize a whole host of drugs from marijuana to heroin and how he has promised never to vote because he feels electoral systems are all rigged. [MP3 audio here; Video below]

Brand stated that he wrote the book because he had recently been spending time in his hometown back in England when:

I realized that ordinary people are getting shafted and they're not represented by the current political system. I thought who is the best person to do that? Me. I would write a funny book just expressing my opinions so that a conversation can begin about change[.]

On drugs, Brand supports legalization of cocaine, heroin, and marijuana and expressed his belief that those deadly substances “can be strongly regulated” and “pharmaceutically controlled by trustworthy people, by whom I mean not big pharmaceutical companies that pump drugs into ordinary people everywhere.”

Later, the actor said this about his rationale for why he’ll never vote:

In the moments before the interview concluded, Lauer played a brief game of word association with Brand on when asked to give the first thoughts that appear into his mind on love, Brand used his thoughts on the word to say that it “could be the very core of our value system instead of corruption and economics.”

As Newsbusters has documented on numerous occasions, it's hard to believe anyone takes Brand seriously as he's accused MSNBC of being "extremely conservative" and held controversial views on misogyny, race, profits, and socialism.

The relevant portions of the transcript from NBC’s Today on October 13 are transcribed below. 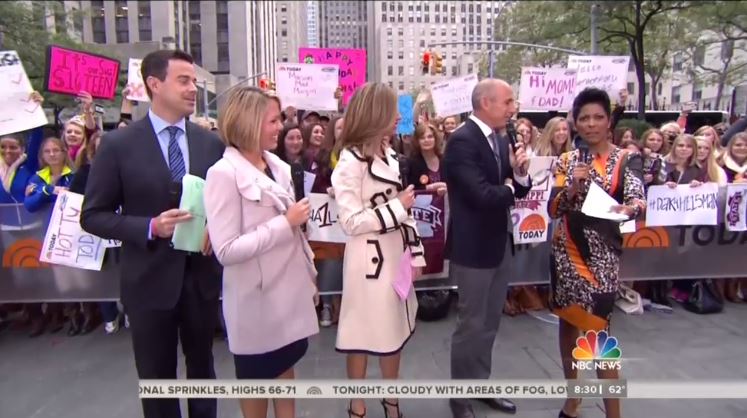 TAMRON HALL: We’ve got a lot of excitement. Guess who stopped by to visit us? Russell Brand. He is out with a new book that’s funny and, as always, thought provoking and Russell will tell us all about it in Russell-fashion –

HALL: – which is a compliment. 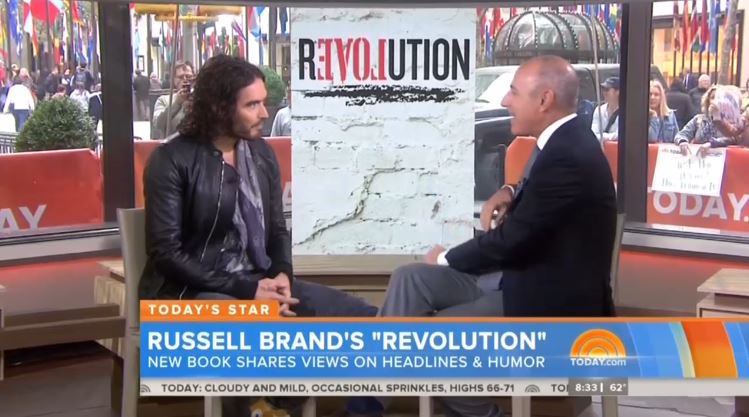 MATT LAUER: Comedian, actor, best-selling author Russell Brand is out with a brand new book. This one is called “Revolution” from drug laws and voting to the redistribution of the wealth around the world. Russell, good to have you back, welcome.

RUSSELL BRAND: Thank you very much.

LAUER: I think people hear your name, they think comedy, some may think Katy Perry for whatever other reason. I think they’re going to –

BRAND: I was married to Katy –

BRAND: – so I’ve made that association there.

LAUER: There you go. I think people are going to be surprised by some of the topics you talk about, anything but funny topics. Why did you write this now?

BRAND: I wrote this book “Revolution,” because, recently I went back to the place I'm from, which is called Grays in Essex. It's a bit like Camden, New Jersey, by which I mean the people are good, the place sucks. So, when I was back there, I realized that ordinary people are getting shafted and they're not represented by the current political system. I thought who is the best person to do that? Me. I would write a funny book just expressing my opinions so that a conversation can begin about change, Matt.

LAURE: And you do combine serious topics with humor, no question about it. One of the subjects you talk about is drugs. You've been open, you’ve been candid about the fact that you faced addictions in the past and yet you say you think all drugs should be legal. Explain your stance on that and why you think it would work.

BRAND: I think drugs can be strongly regulated and they can’t be strongly regulated if they’re in the hands of a criminal economy. As a recovering addict myself, who knows many other people suffering from the disease of addiction, I want to make sure that these people get the healthy need and deserve and aren’t treated as criminals when its something that a lot of people can’t help.

LAUER: What does it look like? What does that system look like when you say “strongly regulated?” Are there stores where people can go like some states in the country now where pot is legalized and go buy crack or heroin or something like that? 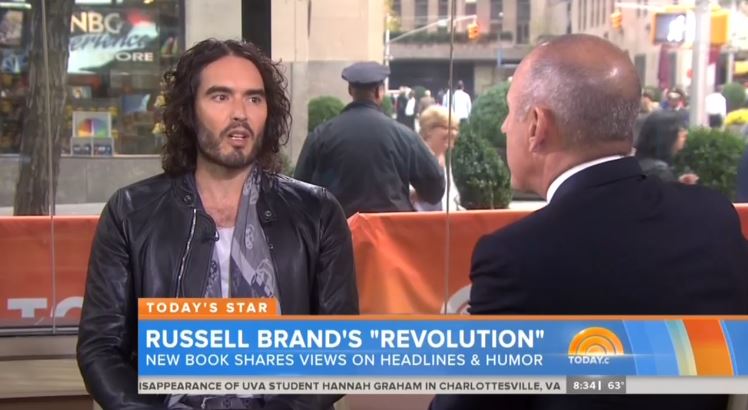 BRAND: I would imagine there’s very toxic and dangerous substances, like crack and heroin, that they would be pharmaceutically controlled by trustworthy people, by whom I mean not big pharmaceutical companies that pump drugs into ordinary people everywhere, like how many people are on Ritalin and the depression drugs in this country. It’s a terrifying number, isn’t it?

LAUER: Yeah, I've had this interview before.

BRAND: Are you having a mental breakdown, Matt, because you're taking too many pharmaceutical drugs?

LAUER: After reading some of your comments on the subjects, it’s clear you have big ideas on big issues.

LAUER: And you’ve kind of created controversy back in the UK when you said however, you have never and never plan to vote.

LAUER: And I'm curious why.

BRAND: 50% of American people don't vote and I imagine they don't vote for the same reason I do. Whoever it is your voting for, you're voting for the party that had the most money in that election. Whoever it is you vote for, you're going to get a party that represents big business, not ordinary people. The views of ordinary people are not represented through the political system, we all know this –

LAUER: You don't even think you get a small voice in the outcome of an election? 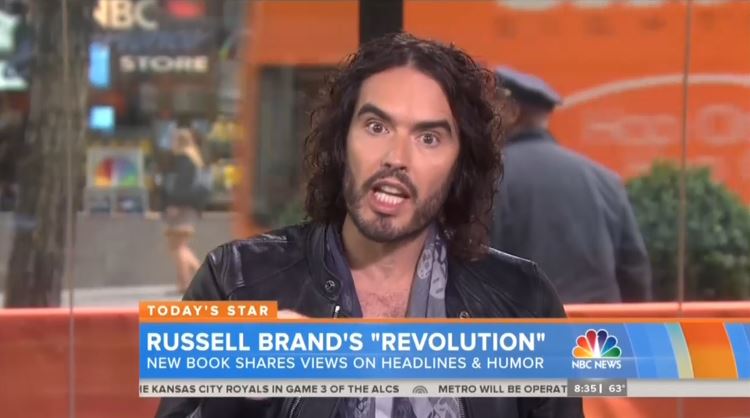 LAUER: Alright, because you're being bashful, and I’m having to draw things out of you, let me give you a couple of words and give me the first thoughts that come to your mind. Alright? Fame.

BRAND: Nice at first. Good for the restaurants and the under-the-table action, but ultimately unfulfilling.

BRAND: I’ve had a few, but then again – [LAUGHTER]

LAUER: I'm sorry I’m a little bit too easy for you. Regrets about marriage?

BRAND: No, no. I really enjoyed it. I think that Katy Perry is an amazing person.

LAUER: You said I think your time after marriage was your beard-and-pajamas post-marital era.

BRAND: Yeah, what happened was, after you get married, like anyone who has been married or come out of a relationship, you obviously have a lot of expectations and if those expectations don't work out, it's probably time to grow a big beard and walk around in pajamas. That's my advice.

BRAND: Love is ultimately what we're here for. Love could be the very core of our value system instead of corruption and economics.

BRAND: It's in the background.

LAUER: Oh, ok. There we go right there. Love is in red and you're encouraging people to go out and do something every day to kind of – something, do something kind for someone else. What have you done?

BRAND: Oh, no, I've been really bad today. Today, I’ve not done anything, but it’s early. The Today show is on very early.

LAUER: What are you going to do today? 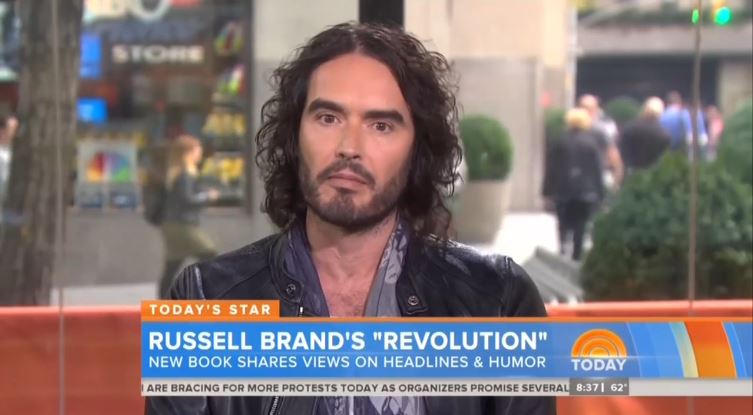 LAUER: Russell Brand, great to have you back.

LAUER: Always a pleasure. Thanks very much.

LAUER: The book is called “Revolution,” you can read an excerpt on our website, Today.com.