CNN’s Cuomo on Biden After Latest Gaffe: ‘I Still Love Biden For What He Is...His Candor Is Refreshing’

At the conclusion of the 6:30 a.m. news briefing during Friday’s New Day on CNN, substitute news reader John Berman played video of Vice President Joe Biden jokingly asking Harvard University’s student body vice president if he finds his job “a b****” after the student introduced himself to ask a question.

Following the video and Berman iterating that Biden later clarified that he does indeed like his job and “the guy that he works for,” New Day host Chris Cuomo gushed how he “still love[s] Biden for what he is” and that “I think his candor is refreshing.” [MP3 audio here; Video below]

Co-host Michaela Pereira chimed in and agreed that Biden certainly “is kind of refreshing” and Cuomo added that “when he is insensitive to something, he owns it” to which Pereira again agreed.

Cuomo then wondered: “What more can you ask for? Perfection?”

The showering of praise on the Vice President whenever he commits a gaffe has become par for the course with the news media. For example, when he uttered an anti-Semitic slur in Iowa last month, Kristen Welker and her guests used a segment when she substitute-hosted MSNBC’s Andrea Mitchell Reports to excuse Biden’s gaffes as what makes him “real” and “authentic.”

The relevant portion of the transcript from CNN’s New Day on October 3 can be found below. 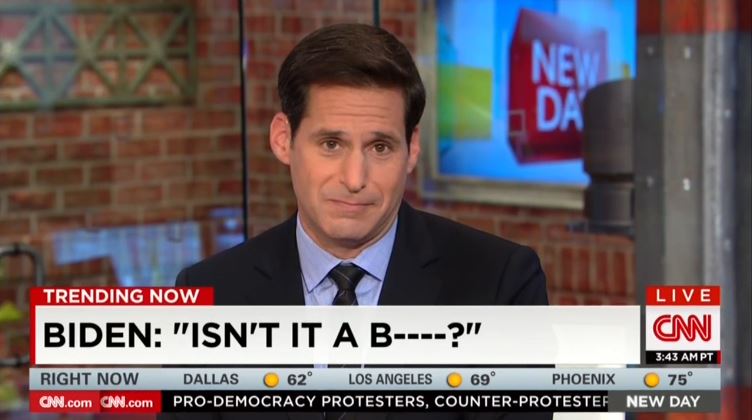 JOHN BERMAN: So sometimes Joe Biden says stuff. The Vice President had a speaking engagement at Harvard University's Institute of Politics last night. Afterwards, a member of the student government tried to fire off a question, so listen to this.

HARVARD STUDENT GOVERNMENT VICE PRESIDENT: I'm a senior at the college and I'm the vice president of the student body here.

VICE PRESIDENT JOE BIDEN: Isn't it a bitch? I mean, that [LAUGHTER] – excuse me. That vice president thing?

BERMAN: Alright, I have to give that one a genuinely funny thing, but the vice president afterwards, assured the student that he really loves his job of being vice president and he also likes quote “the guy that he works for.”

CHRIS CUOMO: I didn't understand the context of a female dog in that discussion.

MICHAELA PERIERA [HOLDING CUOMO’S HAND]: We have so much to work with him on, John.

CUOMO: I still love Biden for what he is. I just do. I think his candor is refreshing –

PERIERA: It is kind of refreshing.

CUOMO: – and when he is insensitive to something, he owns it.

PERIERA: Yeah, he does. He does. That’s absolutely true. 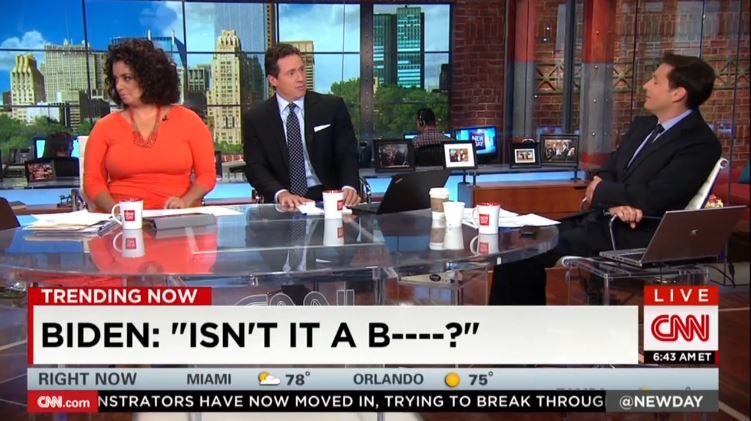 CUOMO: What more can you ask for? Perfection?

BERMAN: That’s what we’ve come to – you know, appreciate in you.

PERIERA: I think, from that, I’m going to turn to you, Indra, quickly –

PERIERA: – and talk about the weather.