No one runs liberals up a wall with comedy quite like Dave Chappelle has in his widely acclaimed Netflix specials such as The Closer and Sticks and Stones. After lots of leftist backlash from previous shows, he once again stands his ground against PC culture in a surprise release on Netflix titled Dave Chappelle: What’s in a Name? according to The Daily Beast July 7. 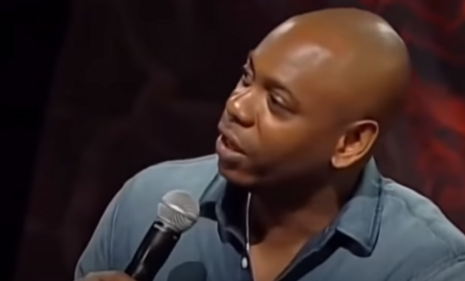 This new 40-minute “speech” is a follow-up to his rejection of an offer from Duke Ellington School for the Arts, his alma mater, to put his name on the theater after he had a contentious Q&A session with the schools students, who accused him of being a “bigot” and “childish,” in addition to hurling accusatory statements like “Your comedy kills.” His new special is in the theater at the school where the Q&A happened, and features serious critique with his trademark stand-up skills mixed in.

He starts by saying “Rather than give this theater my name, I would like to give these students my message.” He goes on to champion the value of free expression, a vital part of comedy, saying, “These kids said everything about gender and this, that, and the other, but they didn’t say anything about art.” He accuses the media and the kids of “removing artistic nuance” from his words, per The Beast.

God forbid anyone realize that Dave Chappelle is a comedian, and to not take what he says seriously! Liberal brains might short-circuit at the truth.

He sums up his attitude to speech policing, saying “The more you say I can’t say something, the more urgent it is for me to say it. It has nothing to do with what you’re saying I can’t say. It has everything to do with my right and my freedom of artistic expression.”

Right on the money.

He calls on the kids at the Q&A to be self-aware about whether their words were genuine conclusions they came to themselves, or if they were parroting propaganda fed to them. He says, “I know those kids didn’t come up with those words. I’ve heard those words before,“ and “These kids didn’t understand that they were instruments of oppression.”

A bunch of high school kids were simply being megaphones of liberal talking points instead of thinking for themselves. Dave Chappelle wants them to realize that, and teach them the value of freedom and how it can be used for good, like in his case, a good laugh.