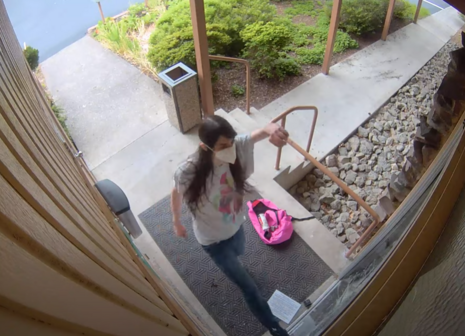 The Roe v. Wade decision has sparked the left to lash out at all who dare to respect the lives of the unborn. The most recent incident occurred in Bellevue, Washington where St. Louise Catholic Church had its windows shattered with a rock, walls sprayed with graffiti and an icon of The Virgin Mary defaced, as reported by Catholic News Agency (CNA) on Wednesday.

Parish Administrator Johnathan Taasan was also assaulted with spray paint when he arrived on the scene, although he was uninjured.

The attacker entered the property at 9:30 in the morning and began the attack. A woman inside was praying in the perpetual adoration chapel when she heard the commotion outside. After she confronted the assailant, she was barraged with expletives and screaming, before hiding away and calling Father Gary Zender.

Bellevue Police said in a tweet that the suspect had been apprehended “without incident” and posted images of the damage. The suspect will be investigated for “suspicion of hate crime,” according to the tweet.

Officers arrested a 31yo Bellevue resident on suspicion off a hate crime and assault after allegedly spray painting St. Louise Parish, smashing two doors and assaulting an employee. The suspect was arrested without incident. pic.twitter.com/1UsDavNx08

CNA posted the CCTV footage from the attack in the article. The graffiti read “woman haters,” “groomers rapists” and “the church is child abuse.” It’s clear the assailant is something of an intellectual with profound words such as these.

Zender estimated that the damages run within the $10,000 range.

“I think it comes up as a bit of a shock that it would happen here. I think there's the reality that, you know, things have changed,” Zender said regarding the attack. “We're not quite as safe as we once thought we were and we have to take more precautions."

The left’s footsoliders will remind everyone that if you don’t like child murder, then you’re a target of their perverse sense of ‘justice.’

Zender led a procession on Tuesday to bless the sites where the attack took place and prayed for the perpetrator as well.

There’s a clear delineation between good and evil here. One side attacks houses of worship because of political disagreements, the other side prays for them and wishes them well. Doesn’t take a genius to see who’s the good guy here.