House Speaker Nancy Pelosi has landed herself in hot water with the Catholic Church in recent days due to her pro-abortion stance, being denied the Eucharist at her home parish. On June 29, however, the stance of the church was completely muddied with her admission to Communion in a Papal Mass according to two witnesses that told The Associated Press.

The Mass fell on the Feast day of St. Peter and St. Paul the apostles, and His Holiness Pope Francis was present. She was seated in the diplomatic section of the basilica and joined in receiving the Holy Eucharist with the rest. 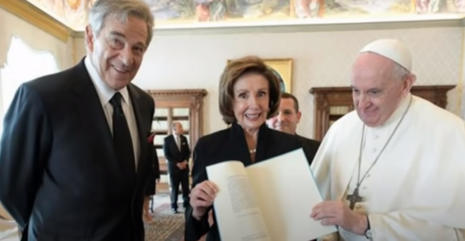 According to Canon law, those “obstinately persevering in manifest grave sin are not to be admitted to holy communion.” She openly advocates for abortion, which is strictly forbidden according to the Church, and Cordileone acted.

Since she has great potential power to lead other people astray she is manifestly advocating for grave sin. These were the grounds initially to deny her Communion, not as a condemnation, but to prevent her from making other Catholics think it’s okay to support child murder in utero.

But now the Pope has thrown the whole affair into utter confusion. If Archbishop Cordileone has the authority by virtue of the Church hierarchy to deny her communion on “pastoral grounds” as he said, then why is Francis undercutting his own appointed clergyman?

Catholics around the world are now completely unguided in what to think on the matter of abortion if their own Pontiff seems to be contradicting Church teaching and his own Archbishop.

Pope Francis has always been an extremely doctrinally confusing Pope for Catholics, and this incident has only added to the discord within Rome.