The leak of the draft for the imminent decision possibly overturning Roe v. Wade has sent the left into a frenzy, renewing their commitment to die on the hill of on-demand abortion. The Huffington Post wants to make sure the children are on board with the orthodoxy too. 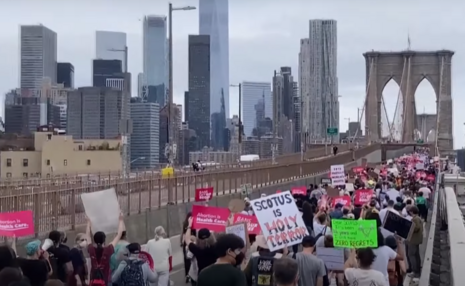 Brittany Wong penned a May 23 article, giving examples and recommendations for the proper progressive procedure in educating kids about the issue of abortion. The prescriptions she comes up with are laden with strictly liberal talking points and blatant celebration of indoctrinating children with one-sided stories.

Firstly, talking to kids about a subject as heavy as abortion shouldn’t be something you want to do. Obviously it might be that a parent is essentially cornered into saying something if questioned enough by their child, but it is certainly not an “ongoing discussion” as YouTube-famous OB-GYN Danielle Jones told Wong it should be. Abortion isn’t just some icebreaker, it’s serious and delves into deep questions about the nature of a life. Abortion should be something only seriously discussed among mature adults.

Nowhere in the article does Wong or her experts characterize a baby in utero as a life. Jennifer Lincoln, a TikTok influence, only explained abortion to her kids when they saw her going to an abortion rally with a sign. She said, “I explained that it meant someone is pregnant and does not want to continue the pregnancy,” she said. “Sometimes they’re not prepared to have a baby, or there are medical reasons they should not, or sometimes they just don’t want to continue the pregnancy.”

This is a monumental softening of the gravity of abortion, something that one risks when protecting children’s minds. Serious positions on abortion are, once again, something only adults should have, much less promote. Knowing the horror that an abortion is, it is absolutely despicable to promote biased accounts of abortion to them that they will inevitably parrot, unaware of the reality of the procedure and the nuance of the arguments across the political spectrum.

As with any author championing the liberal cause, Wong didn’t forget to mention the fact that abortion bans will prevent more people of color from having abortions. According to the Vital Statistics of New York, more black babies were aborted than were birthed in New York City. Is it really a racist suggestion to want to save the lives of black babies? Isn’t that hurting “some people more than others” as CEO of a communications firm Ariane Le Chevallier declares in the piece? The left’s obsession with race permeates every core issue of their policies. Weaving together multiple narratives, Wong wants you to not only teach your child that those who oppose abortion are misogynists, but racists too.

Abortion is not something to actively teach young kids about. This article encourages parents to teach young children about an extremely mature subject in an inherently unfair manner. The question of abortion is, at its core, a question of what constitutes a human life. Discussions regarding this issue should be fair to both perspectives, pro-life and pro-choice, and not involve children at all.