You might assume that a former male Olympian who underwent a sex change is more qualified to speak about trans issues in women's sports than comedian Sarah Silverman. Nope. 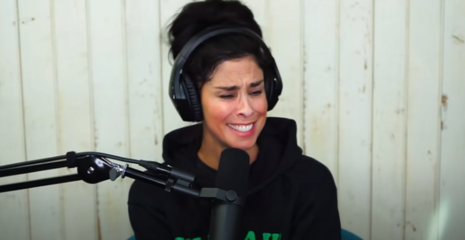 Silverman was assaulting Jenner for her science-backed stance on banning trans athletes from participating in women’s sports teams. Jenner has held her ground regardless of the corresponding backlash, stating that “It just isn't fair. And we have to protect girls’ sports in our schools.”

Silverman wasn't having it. Ideology trumps experience. “Caitlyn, you’re a woman, right?," Silverman asked. "A trans girl is a girl. She should have the same rights as cis girls.”

Silverman went on: “What, you think a trans girl is too strong? What about tall girls as opposed to short girls? What about boys in high school who are teeny tiny and their teammates have already hit puberty and are shaving? Why don’t you just have co-ed sports divided by weight and height, you know?”

Silverman denied any observable differences or athletic abilities exist between the the sexes. Very “pro-science.”  “This is so dumb. They are legislating this s**t without one single example of how this plays out.” Yahoo!news thought itself slick and also tried to gaslight Americans into believing this tripe by reporting on the matter:

“Silverman is correct in noting that the much-reviled trans sports bans are backed by no real-world evidence, with Republican lawmakers unable to give examples of this issue outside their own heads.”

Not too long ago, Silverman shared on this same podcast that the “absolutist-ness” of the Democrat party is “such a turn off to me.” Not only this, but she called out the Democrat establishment for being “so f--cking elitist,” that “for something called progressive, it allows for zero progress.” Conservatives were shocked to hear Silverman of all people rage at the Dems, especially when she said “I really, I think I don’t want to be associated with any party anymore.”

But that was then. Silverman hatefully concluded, “This is not what that is, this is not concern for girls’ sports, this is transphobia full stop. It’s just such a bummer when such a prominent trans woman is such a t**t.” Of course, such an accusation is ridiculous in reference to a transwoman. Will any of the LGBT community stand up for Jenner? No.