Captain America: Out of the Closet and Into Comics

Someone switched out the super soldier serum. Captain America is now gay. Our beloved champion is now a social justice warrior, taking on the form of a gay teen with tattoos, multiple piercings, and an edgy, shaved haircut. Make sure you refer to him with the correct pronouns, or else.. 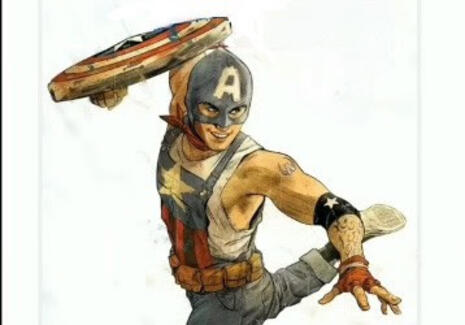 Marvel is honoring 80 years of Captain America by releasing a new limited series entitled “The United States of Captain America”  in June, or more famously known as “Pride month.” The series follows the cross-country travels of Captain America in search of the evil-doer who has stolen his shield. He will encounter new and diverse characters along the way, who each in turn take up the hero’s role within their respective communities. Steve Rodgers, Bucky Barnes, Sam Wilson, and John Walker, the most famous renditions of Captain America, are teaming up on this quest. The first installment features Aaron Fischer, “the Captain America of the Railways” and gay teen who is committed to protecting “fellow runaways and the unhoused.”

This “new queer shield bearer” is “inspired by heroes of the queer community: activists, leaders, and everyday folks pushing for a better life," says Josh Trujillo, co-writer of the issue. "He stands for the oppressed, and the forgotten. I hope his debut story resonates with readers, and helps inspire the next generation of heroes."

The artist and transsexual woman, Jan Bazaldua gushes over this new character and creative opportunity as being very close to her heart. "I want to thank editor Alanna Smith and Joshua Trujillo very much for asking me to create Aaron. I really enjoyed designing him, and as a transgender person, I am happy to be able to present an openly gay person who admires Captain America and fights against evil to help those who are almost invisible to society,".

Naturally, the press and creators must make a big fuss over this new gay character. “Marvel Comics is proud to honor Pride Month with the rise of this new  LGBTQ+ hero." It is clear that the heads at Marvel entertain politically correct motives as we’ve seen before, and oftentimes at the cost of quality storytelling. This stunning and brave addition to Marvel’s universe will most likely appeal to a very limited target audience, but when sales reflect that, Marvel will be able to blame U.S. homophobia. Will they face the reprisal of the “go woke, go broke” phenomenon? Time will tell.

LGBT types are are eating it up. Pride.com says  “we’re finally getting the gay Captain America we deserve.” Some fans have taken to Twitter to voice their disappointment with the hijacking of Captain America’s legacy for this new gay character rather than creating an original LGBT hero.