Some people set good goals and try to accomplish them. Those goals may include losing 10 pounds, maybe trying to secure a job, or working on their mental health. 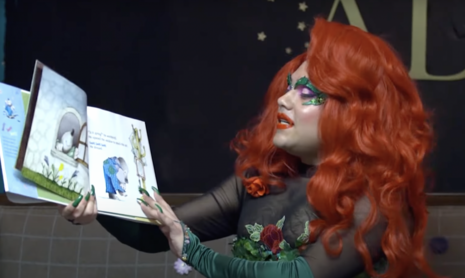 Others set goals that are ridiculous. Like this one.

In St. Petersburg, Florida, a group of organizers set a goal to create the largest “drag queen story time” in hopes of earning a spot in the Guinness Book of World Records. The Blazereported that the event - still to be held - will be full of political discussion, activism and, of course, drag queens reading to kids.

If you live in the area, don’t go.

According to the Florida Standard, organizers deemed the event “a fabulous family-friendly celebration of literacy.”

My cringe alert is on full-blast.

The event has been in the works since 2017 and here’s what the organizers hope to accomplish:

As another red flag, The Blaze mentioned that some of the event organizers work for a group called "Wordier Than Thou," which aims to “blur the lines of what a literary event is.” So yes, they’re literally admitting that they are going to push or go over the boundaries of what is and isn’t acceptable, and what constitutes as an event featuring actual books.

Even though you and I see how dumb this is, the buy-in is unfortunately growing. More than 200 people reportedly have RSVP’d and 1,300 others claim to be “interested.”

The thing is, regardless of what organizers think, drag, in and of itself, is not “family-friendly.” There is absolutely no need for kids eyes to be assaulted by men in skirts, fake eyelashes and prosthetic boobs. If that sight is scarring for most adults, imagine the damage it does to the minds of kids who can’t fully understand the delusion they're watching.

The event was canceled in 2021 due to COVID-19. Hopefully reality sets in and the event in ‘23 is canceled, too - or, at the very least, no kids will attend.