When reading daily headlines, I often find myself thinking that I dreamt what they say due to the extreme level of radical lunacy … Friday was one of those days. 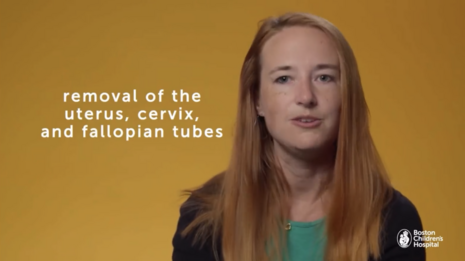 Boston Children’s Hospital recently boasted about its new procedures. It plans to offer hysterectomies as part of its “gender-affirming" treatment in order to help patients remove organs that they don’t want.

Editors note: PolitiFact fact-checked the Libs of TikTok tweet and clarified that Boston Children's does not perform hysterectomies on minors. Nonetheless, these are surgeries that take place at Boston Children's Hospital, a pediatric medical facility.

Boston Children's has not explicitly stated that it won't extend the procedure to younger patients in the future, not to mention, 18 is still too young for sterilization if you ask me.

No, this is not part of a dystopian fictional narrative. This is August, 2022 where even the craziest of stories and situations are coming to fruition.

Boston Children’s, one of the nation's leading pediatric hospitals, released a YouTube video titled “What happens during a gender-affirming hysterectomy?” The video seems to have been released early Aug. but as of Aug. 12, the video appears it is listed as private and therefore unavailable.

The video featured Dr. Frances Grimstad who specializes in gynecology. Grimstad walked viewers through the steps of a “gender-affirming hysterectomy.” During a hysterectomy, surgeons remove the uterus, cervix, and fallopian tubes — all of which are reproductive organs. The procedure permanently prevents a patient from any possibility of bearing children. The procedure is non-reversible. Grimstad's delight when explaining the process of mutilating patients is terrifying.

To make matters worse, Boston Children’s updated its YouTube series titled “Understanding Gender: Answers for Families,'' where videos about “vaginoplasty,” “tucking,” “breast augmentation” and “choosing a bathroom” are all highlighted. The hospital boasted about its "full suite of surgical options for transgender teens,” the Post Millennial reported.

The hospital also has a dedicated “suite” to surgically remove organs of patients. This is evil.

Thankfully, people who are against the medically reckless castration of patients have stood in opposition. The Daily Wire’s Michael Knowles put it great in Friday’s podcast episode of The Michael Knowles Show.

You expect, when you see this kind of evil in the country, you expect it to come with a pitchfork and horns and maybe a kind of scary, demonic voice, Grrrrrraaaa. Listen kids, we’re gonna cut your womb out, argh. But it’s not how it happens actually. It’s even more insidious than that.

These psychotic doctors are posing as so-called friends and companions of these impressionable and vulnerable patients. Doctors at Boston Children's are approaching patients with “compassion,” as Knowles put it, to affirm a delusional sense of identity.

Director of Outreach at Parents Defending Education Erika Sanzi tweeted her worry for these kids and the glamorized idea that it’s okay to promote life-altering and unnecessary medical procedures.

Sanzi told The National Desk “A world renown pediatric facility proudly talking about removing the uteruses of healthy young girls in the name of gender affirming care is terrifying” and reaffirmed that this is “mutilation” of healthy bodies.

Boston Children's has the potential to help and save so many lives but this “gender-affirming care” is a regression of those possibilities. This will only hurt patients in the long run and the media needs to expose the group for its lunacy in order to combat these vile, malicious, and destructive practices.