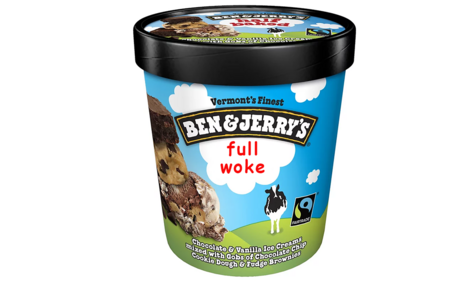 Ben & Jerry's Ice Cream has always made it abundantly clear that it’s got leftist ideology churning through the business. But in the last month alone, Ben & Jerry's franchise has pushed leftist propaganda at least seven times.

Supposedly Ben & Jerry's is worried that Israel won’t sell ice cream the way they do it here in the states like its anti-trump “Pecan Resist” or Colin Kaepernick’s “Change the Whirled” flavor to challenge “anti-Black roots of policing.”

A women’s march is coming to Houston, Texas and Ben & Jerry’s is hyped to “fight for a feminist future” … said Ben and Jerry, two males.

Reproductive rights are under attack. Join the fight for a feminist future at #WomensConvention22, Aug. 12-14 in Houston, TX! ✊🏾 Join @womensmarch, @blkfemfuture, @PPact & more as they strategize, organize, and prepare for the next phase of this fight. https://t.co/TYauDxvKnI pic.twitter.com/V7Y2vYYDnt

Oh the irony. Massive destructive flash floods hit KY while a large trailer with Vote Mitch McConnell for Kentucky is washed away in the water. McConnell denies that climate change is real and continues to support global warming fossil fuel barons over the needs of KY citizens. pic.twitter.com/6tAX4gHxv2

Oil companies' profits are immoral and unsustainable. While working people struggle with high gas prices and record inflation rates, Big Oil is raking in dollars hand over fist for CEOs and shareholders. We need a windfall tax to stop this profiteering. #BlameBigOil pic.twitter.com/noTRw2zeo0

What pairs great with a single scoop of chocolate ice cream? Baby killing!

The fight isn't over! ✊🏾 Get your tickets now for the #WomensConvention22 in Houston, TX Aug. 12-14 and join @womensmarch, @blkfemfuture, @PPact & more as they strategize in the fight for a feminist future. Learn more & get tix: https://t.co/TYauDxvKnI pic.twitter.com/UkHmkjwI1C

On July 13, Ben & Jerry's staged a walk-out to support the Bans Off Our Bodies campaign against the overturn of Roe v. Wade.

Today we are proud to join many other companies and their employees in standing up and walking in support of abortion providers and abortion rights. @PPFA #BansOffOurBodies pic.twitter.com/KCjOye9Adb

On July 12, Ben & Jerry's CEO’s hosted a live stream titled “How Cops Get Off: The Law” in opposition of our police force.

JOIN US: Tomorrow, AP’s @jbrownedianis and @benandjerrys Ben Cohen and Jerry Greenfield live on Instagram at 4PM EST to discuss The Law, part 3 of our #HowCopsGetOff series. Our country’s laws allow cops to get off when they commit serious malpractice – we’re talking about it. pic.twitter.com/VO1gcGm2as

It's been decades since the miserable old hippies Ben and  Jerry were about making tasty and unique flavors. They're just pushing the radical leftist agenda in every cup, cone or shake. It's no wonder Biden is so in love with ice cream!