The overturn of Roe v. Wade is going to impair the next generation’s sex-life according to Sunday’s Daily Beast piece. 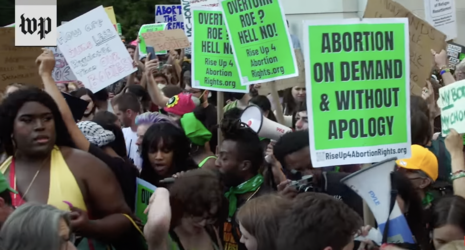 Abortion access has supposedly become “a war” and White advocated for women to “manifest on the streets, on the page, and in conversation.” Yes, take to the streets to ensure that you have the “right” to kill your babies after you choose to engage in unprotected sex. That's the narrative these lunatics want you to buy.

White’s key line was:  “If every man went into sex thinking, 'Do I want to have children with this woman?'—the idea would be seen as patently absurd.”

That’s the thing though. Every time you have sex you should recognize that there is a chance of pregnancy resulting. If you don’t want to take that chance, don't! Very simple math.

Keeping sex fun is not the most important conversation to be had right now. But it cannot go without being said. Our war to regain equality as women in this country must be won on as many fronts as possible.

So the war now is that abortion needs to be accessible so that people can have more sex and not worry about having to raise a child. OK then.

White warned that this attitude may be in jeopardy in places where life-affirming laws are being placed.

What does it mean that for those in more liberally-minded states (such as New York, the one in which I’ve resided for almost all my life), conversation about sex is more of a casual, stress-free topic than for those in states that are swiftly banning abortion?

The author then boasted about having had sex with at least 17 men throughout her life but explained that keeping track of this number shouldn't matter.

Why keep track? Because if it doesn’t matter to me, it shouldn’t matter at all. That’s the freedom and privilege of having had access to abortion and contraception for my entire adult life.

The underlying attitude of this piece is that people should be able to have sex with whoever they want, whenever they want and deal with the consequences of that choice however they wish -- or, better yet, without consequence whatsoever. But the reality is that if sex results in an unexpected or unwanted pregnancy, the baby should not be placed on a death sentence for the actions of two careless people.

So Ms. White, the only thing the next generation should fear is hearing the lies that the you're feeding them about how a child’s life is meaningless and about how sex is something casual and “carefree.”