Welcome to hell on earth where churches and organizations are getting destroyed for trying to save babies. 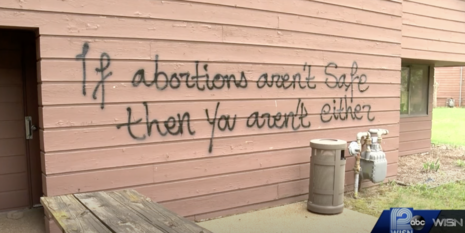 On May 2, a leaked U.S. Supreme Court draft was leaked. The draft indicated that the Court plans to overturn the 1973 Roe v. Wade decision. Since then, there have been attacks on life affirming organizations every week and in total, 41 separate incidents, according to The Washington Stand.

The Washington Stand is Family Research Council’s outlet for news and commentary. One of the senior editors, Dan Hart, penned a piece titled “Churches and Pro-Life Orgs Have Been Attacked 41 Times in the Last 40 Days.” Hart included the fact that that these 41 separate incidents don’t even include the nine other “occurrences of physical violence against pro-life advocates” or threats/disturbances against churches.

Hart provided the growing list of these 41 attacks spanning from May 2, 2022 until June 13.

The first attack happened the day after the SCOTUS draft was leaked. A Catholic Church in Boulder, Colorado was vandalized with “My Body My Choice” graffiti. The Catholic Church is prominently against the slaughter of the unborn so it is an easy target for abortion activists. According to Hart’s list, 33 other attacks happened in the month of May alone, 16 of them being at churches.

In June so far we have seen seven attacks in just 13 days and as the official Roe v. Wade decision is likely to come out this week, that number is likely to increase, especially in the case that Roe is overturned. The most recent attack was on Saturday, June 11 when a pregnancy resource center in Gresham, Oregon was firebombed.

Hart mentioned the hypocrisy of the U.S. Department of Homeland Security when the group issued a “Terrorism Threat” advisory on June 7 that “appeared to equate the amount of violent incidents from activists on both sides of the abortion issue.”

In Hart’s piece, he included a quote from the director of Family Research Council’s Center for Human Dignity.

For the last 49 years — each time the pro-life movement had encountered an uncertain future, whether it be the future of an unexpectedly pregnant mom or of Supreme Court decisions, the movement has responded with an outpouring of love, resources, and prayer. For the pro-abortion industry, the exact opposite is true. Their solution to uncertainty about a mother’s future has always been violence and destruction in the sacred space of the mother’s womb. It is not surprising that now that the pro-abortion movement is facing uncertainty of the future decision of the Supreme Court, their response is once again violence.

There's another reason Homeland Security's "both sides" advisory is junk: If the Dobbs decision overturns Roe, it will be a defeat for abortion enthusiasts. Losers lash out in fury and frustration, winners don't.

Hart did provide a bit of encouraging news when he said that a pro-abortion extremist group called "Ruth Sent Us" reportedly shut its website down. The website had the addresses of many of the Supreme Court Justices and after the attempted murder of Justice Brett Kavanaugh, thank goodness the site is dismantled. Notice that the "Ruth Sent Us" website is just one group of the many heinous, violent, and evil abortion activist groups who aim to keep abortion legal and not many if any others have followed suit.

I wish I had more promising news but the 41 incidents is probably just the beginning, especially if this week SCOTUS votes on the side of life.