Aspen Institute wants less digital surveillance. Why? So that women can travel to abort their babies without anyone knowing. 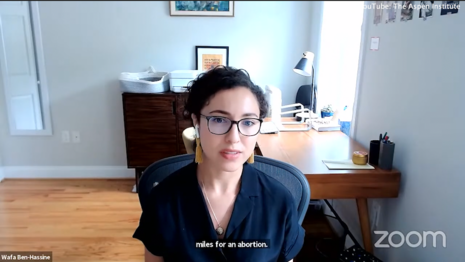 In a May 11 Zoom lecture with Aspen Institute, speakers emphasized the importance of digital privacy in order to protect women who still want to kill their babies in areas where abortion is outlawed. The Aspen Institute speakers essentially pushed for less surveillance so that women won’t get in trouble when they commit the crime of abortion.

With the potential overturn of Roe V. Wade, abortion “rights” will no longer be set at the federal level but instead, decided by individual states. This is a big step for the pro-life movement as many red states will outlaw abortion — as they should.

Wafa Ben-Hassine from the Omidyar Network stated “The situation with the possibility of overturning Roe V. Wade just kind of demonstrates and highlights why it’s so important for us to move our attention back to the role of data brokers as well as the amount of consent that we have as users.” Data brokers are essentially the middle-men. Applications receive data from users, data brokers receive that data and then they sell and distribute it. Ben-Hassine is advocating for more privacy on our cell phones so that women can travel to get abortions even when it becomes illegal.

“This is all about users, about people, not giving consent to something and then having the long term, slippery slope implications of what that means,” Ben-Hassine claimed. Yeah, I bet the babies being killed from abortion aren’t consenting to their own slaughter but who cares about them anyway, right? My body, my choice?

Aspen Digital Executive Director Vivian Schiller asked the speakers how minorities would be affected in a post Roe world and Ben-Hassine was quick to answer. She complained that after the Texas Heartbeat Bill was passed, travel costs for women went up and that with abortion being less accessible, women at or under the poverty line will “struggle.” Nothing like struggling for life though. Leave that to the unborn.

Luckily, as the moderator mentioned, companies are starting to “step-up” to pay for travel and work expenses for women who want abortions. Kudos to Tesla and Amazon for being such bold supporters of baby killing. What an honor.

I thought the propaganda and lies of this Zoom couldn’t get worse but, in pops Senator Ron Wyden (D-Ore.). Wyden claimed that the overturn of Roe is a “draconian infringement on women’s freedom and privacy.” I think the only thing ‘draconian’ in discussion is the mass murder of the unborn. What about that Sen. Wyden?

Wyden brought up that location data leaching is “abuse” and mentioned how data brokers aka “bounty hunters” are selling data on women’s trips to planned parenthood to kill their babies, women’s search history and updating a period tracking app. Wyden coined the phrase “uterus surveillance” which he, though he has no uterus, was highly concerned about.

My favorite part of Wyden’s monologue was this:

For Americans who believe in protecting liberty and the right to privacy, this is out of the nightmare that you hear about from totalitarian regimes.

During the meeting I submitted a question. I asked if these limited surveillance expectations should apply to other criminals too or just criminals of abortion. For example, if data is collected that pinpoints a serial killer to a specific crime, should that data be used against them or not? My question was not addressed in the Zoom nor in the email I sent Aspen afterward. Go figure.

Should Americans have the right to privacy? Yes, but not when that privacy comes at the expense of innocent lives being aborted. Aspen Institute and every speaker they had on today advocated for more data privacy simply so that women can get away with the crime that is abortion. Talk about empowerment, am I right?