Looking For A Tough Country Man? Morgan Wallen Is NOT Your Guy! 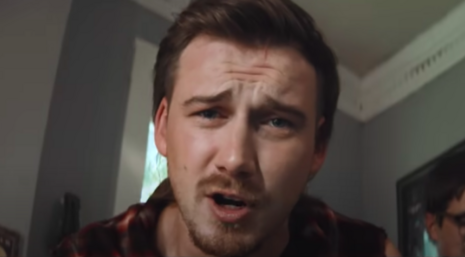 For someone who had trouble keeping his mouth shut before, the past 62 days were spent pretty quietly for country star Morgan Wallen.

Back in February, Wallen posted an explanatory video regarding his drunken use of the n-word after a 72-hour bender. Since then, Wallen has “gone off the grid” for a while to make “good decisions” and has participated in little to no media interaction. Tuesday night, however, Wallen penned a four page long, hand-written letter to his Instagram fans which basically just extended his hiatus.

He started the letter with a few pages of thank you to his fans for continuing to stand by him. Even after the scandal broke, fans brought his Dangerous album to #1 for ten consecutive weeks. “I know my corner hasn’t been the most popular one to stand in recently, but most of you did anyway.” Though fans were supportive, Wallen’s music was not only pulled from many radio stations and streaming platforms but he was dropped by his own agent as well.

Wallen proceeded with a self-fulfilling prophecy regarding how “proud” he is of the man he is becoming. He explained the “big difference” he sees in himself from first moving to Nashville at age 22 to the 27-year-old he is now and how he will “always strive to be better.”

“I’ve made some mistakes, I’m figuring those out, + I apologized because I was truly sorry + have been making amends.”

“I wanted to let you guys know that I’ve taken a couple months away + feel like I’ve really worked on myself,” he said. Yet, he still thinks he needs more time out of the limelight. I didn’t realize a mess up required months (and counting) of time off. But, that’s how cancel culture works. It’s a vindictive and perpetual cycle of apologies, time off, diversity training, and more SJW lectures - for what? The woke mob excels in overstepping and they are never going to be satisfied anyways!

Wallen announced that his "hard" 2020 (he was kicked off SNL for violating their COVID protocols) carried over to 2021 and he is bowing out of all performances this summer. He specifically referenced festivals and his initial plan to open for the Luke Bryan tour. Sorry to all the country folk who were looking forward to Wallen’s attendance.

“I’m back in Nashville getting back in the swing of things + you guys can rest assure that I am looking forward to giving you guys what you deserve, especially after all you’ve done for me. My story is far from over + getting back out to see y’all is all I can think about. So just know you’ll be seeing me sooner than later,” he said at the end of the letter.

Will we be seeing him “sooner than later” or will he keep up with these bonehead casualties? The Instagram post is nearing 800,000 likes and received over 320,000 likes within the first hour of posting according to Variety. Apparently, fans have also paid for billboards in support of Wallen. The die-hard country fans still love him yet Wallen weakly breaks to cancel culture for a second time.

If he wants to be a “better man” why doesn’t he stop washing the feet of the woke mob. He learned his lesson. Strap up your boots, grab your cowboy hat and get back on the saddle.