Embarrassing: Jane Fonda Wants You to 'Exercise Your Right to Vote' 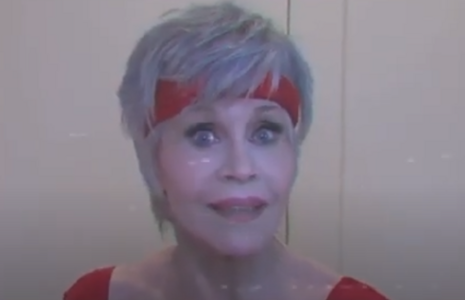 In an effort to persuade Americans to vote in the upcoming election, Jane Fonda created a video reminiscent of her 1980s physical fitness classes.

The video showed Fonda in her past occupation as a well-known fitness professional. She enthusiastically encouraged everyone to “exercise our right to vote!” The video then cut to scenes of Vanessa Hudgens, Ken Jeong, Shaquille O’Neal, Kerry Washington, Ashley Benson, Katy Perry, Amy Schumer and Orlando Bloom exercising and telling viewers to “exercise your right to vote,” while upbeat 80s music played in the background. The program ended with a link to exercisethatvote.org.

Fonda may desperately want people to turn out on election day, but surely there are more attractive ways of encouraging Americans to vote--ways that don’t involve cheesy acting, horrible puns, and Shaq’s butt.

And why is she enlisting the aid of an Englishman--Orlando Bloom--to encourage Americans to vote? More importantly, why did Bloom agree to take part in this video? An American election isn’t any of his business.

This video will probably be appealing to Americans who used Fonda’s videos to get in shape in the 80s, but to everybody else, it just looks hokey.