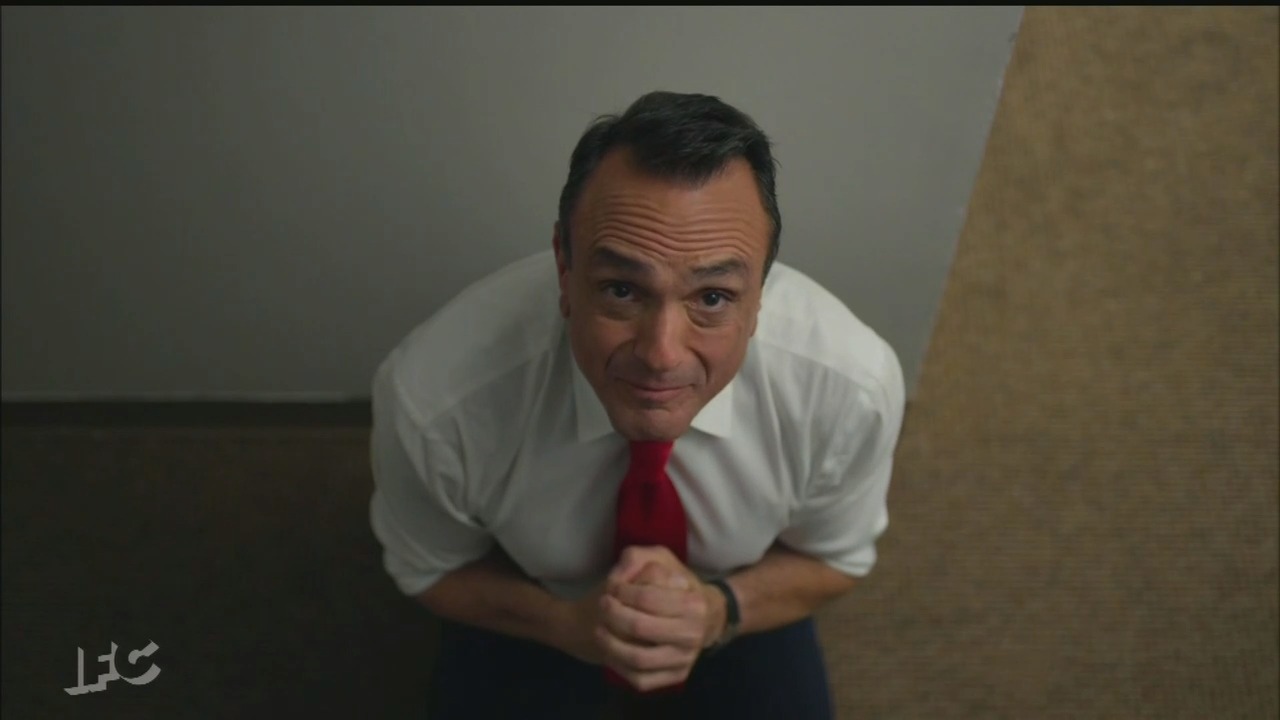 Atheist Jim Brockmire (Hank Azaria) on IFC’s Brockmire might not make much headway in finding God, but he does find plenty of ways to offend in April 17’s episode, “The Yips.”

Brockmire suffers from a mental block with his baseball announcing and his sponsor, Shirley (Martha Plimpton), tells him that's normal for his stage in sobriety and to rework the AA steps. The problem is Brockmire doesn't believe in God and hasn’t truly completed his AA program, having left out the steps which involve surrendering to a higher power.

He realizes he needs to find God and Shirley suggests starting at the Catholic Church they meet at, but Brockmire says, "Real life Slytherin? No. No, thank you. At least with Mormons you get magic underwear and your own planet."

He asks to tag along to church with his co-worker, Gabby (Tawny Newsome), and is initially disappointed they aren't going to a black church, since he "knew today was gonna be a total write-off, but I was at least looking forward to some great music and some pretty impressive hats." Worse, though, is how he finds a way to be insensitive to both Jews and Christians by referencing the Holocaust. They're promptly kicked out before the service even begins.

Gabby: All right, but before we go in, you have to promise me-- promise me that you're not gonna embarrass me.

Brockmire: Of course I promise you. Look, I appreciate you bringing me. I know how important it is to you. I don't take it lightly. Last thing in the world I wanna do is embarrass you.

Pastor: Would you mind closing the door?

Gabby: Why did you bring up the Holocaust?

Brockmire: Well, the priest is the one who brought up a benevolent God. I thought that called for a rebuttal witness.

Gabby: No, you called Jesus the Mayor of Auschwitz.

Brockmire: Well, I don't wanna work with some thin-skinned God who can't handle a little criticism. Now, if He's all-powerful, why doesn't he grow Himself a pair of balls.

Fearing he’ll be fired for his troubles in announcing, Brockmire becomes desperate enough to pray, but then mocks it as the feeling of having to go to the bathroom.

Brockmore: All right, Sky Daddy, let's do this thing. Oh, boy. God, I haven't been in this position since I was looking for Sandy Duncan's glass eye on a bathroom floor. She wouldn't have sex with me unless we found it. Which we never did. Had to settle for a bunch of mouth stuff. But this is probably not a great prayer. Okay, I don't see any way out of this stupid thing, and I was hoping that you could show me. Please. Still waiting. Oh, my God. I feel something. Oh, it's like a pressure deep down inside of me. Oh, shit. I just have to pee.

Ultimately, Brockmire comes to see God like he sees the Godfather, saying, “He runs a protection racket. You need something and you can't turn to anybody in the mortal realm, you call on God, you ask Him for a favor. Someday--and that day may never come-- He asks you for a favor in return.” God is actually worse than the Godfather, according to Brockmire, “Don Corleone just had politicians in his pocket like so many nickels and dimes. God's got all of existence on His payroll.”