Welcome to New York City, where you can see iconic sites like the Empire State Building, Freedom Tower, and a drunk subway slip n slide?

Libs of TikTok tweeted a video of NY residents having a slip n slide in the middle of NY’s busy subway while drinking alcohol and twerking. 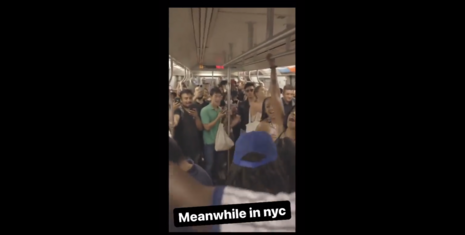 Related: Narcissist Mayor Adams: A Female God Made Me For ‘This Moment’

The video shows numerous women in revealing bikinis sliding down on the probably dirty subway floor. The footage includes fast-paced rap music to accompany the women drinking alcohol and plenty of twerking. They must be taking inspiration from Tiara Mack. The tweet also shows numerous citizens joining in the debauchery. The women grind on multiple people, and even have a dog simulate sex on one of the women — pretty disgusting stuff. One woman is shown to be holding a sign that reads “viral exposure,” which means these women had nothing better to do and decided the best use of their time was to twerk for the people of New York. How empowering!

If you want to wake up in a city that never stops being degenerate, then move to good old New York.