Who knew that NASCAR, of all organizations, maintains a gulag for political criminals? It’s true. The sport of good ol’ boy bootleggers is now run by humorless apparatchiks enforcing speech codes. 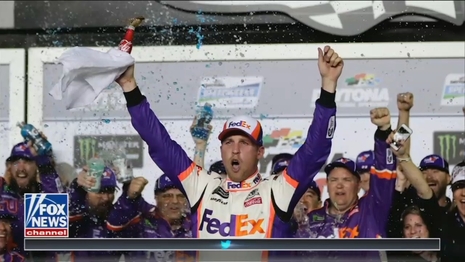 According to Yahoo, “NASCAR on Tuesday ordered Denny Hamlin to begin sensitivity training this week after he posted an anti-Asian meme from the television comedy ‘Family Guy’ to criticize Kyle Larson's driving on the last lap at Talladega Superspeedway over the weekend.”

To translate “anti-Asian” from commissar speak, the meme featured “an Asian woman speaks in choppy English before moving across six lanes of traffic with no warning.” Make’s one’s blood run cold, doesn’t it?

‘I took down a post I made earlier today after reading some of the comments,’ he wrote. ‘It was a poor choice of memes and I saw how it was offensive. It came across totally wrong.’

The background: Hamlin is a driver and owner who's won the Daytona 500 three time. In that last lap at Talladega Kyle Larson made a move that caused two other cars to crash. Hamlin owned those two cars. Larson and Hamlin are friends. Kyle Larson is half-Japanese. Last year, Kyle Larson himself was suspended for using a racial slur in an online race. Hamlin’s race team includes Bubba Wallace, NASCAR’s only black driver (he who decided to mistake a garage door pull for a noose a couple of years ago.)

Given the complicated history and web of relationships in play, NASCAR has decided not to have Hamlin pulled apart by two stock cars, as is customary for serious thought crimes.

After his time in sensitivity re-education camp, Hamlin will be assigned to a collectivized farm in a distant province until NASCAR judges his counter-revolutionary tendencies to have been corrected.