The Lost Angeles Times on October 3 asked the question that’s been on nobody’s mind: “Can the future of comedy be socialism?” Then, before writer Todd Martens could even begin to address the question, the Times answered for him with a correction at the top of the article: 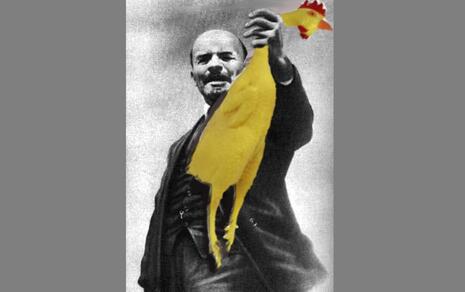 1:49 p.m. Oct. 3, 2021: An earlier version of this story referred to Ruha Taslimi as an actress. The performer is non-binary and uses the pronouns they/them.

Socialism has always been resentful and joyless. Add to it the grim solipsism of modern wokeness, you’ve comedy death. And nothing about The Comedy Co-op, which Martens said is “a planned theater in the works by more than 30 local comedians” sounds at all funny.

But I could be wrong. Indeed, much of Martens's article reads like drafts of Monty Python scripts. Obviously there’s Stan wanting to be Loretta in The Life of Brian, but check out these bits from the piece:

“It’s radical,” says Zepeda, who once ran a diversity show at Upright Citizens Brigade and has become one of the new group’s largest proponents of sociocracy, which utilizes a series of committees to diffuse a hierarchal set-up.

And it’s speaking to a charged political moment of social reckoning, when institutions large and small are being re-evaluated on their diversity, equity and workplace harassment policies

Membership tiers are being drawn by a 30-plus steering committee currently broken up into intimate groups of four to seven to focus on branches of running a cooperative business. Multiple people are in multiple committees, creating communal links to ensure — hopefully — no decision is made in a vacuum.

The Holy Grail’s filth-gathering peasants have nothing on these drones.

Still, leftism ain’t exactly a rubber chicken, and nobody has more taboos than progressives.

So no censorship? That’s reassuring. But, er, wait.

“What’s important to me is to be solution-orientated,” [comedian Jessica] Zepeda says. “If someone [screws] up on stage, we’re not going to kick them out. There’s going to be accountability. We tell people to act better, and give them no tools. We need to have sensitivity training.”

If a comic accidentally says something funny on stage he gets sent to re-education camp. Sounds kind of like censorship. And a lot like socialism.